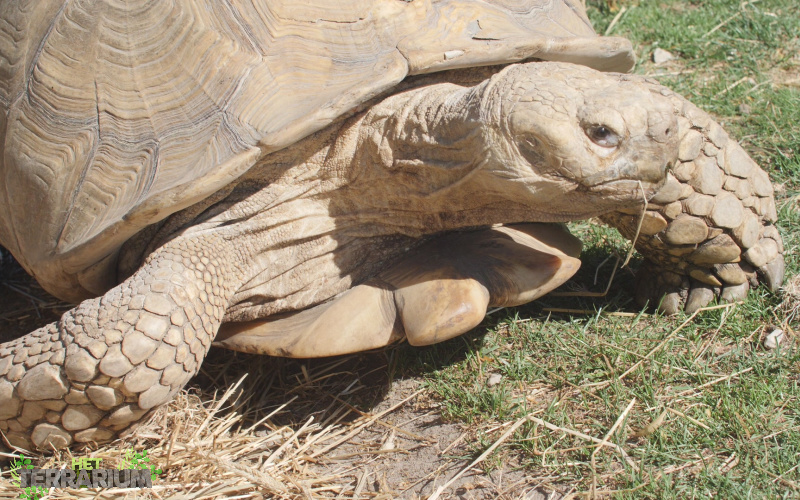 The African Spurred Tortoise is one of the world's largest tortoise species and is only surpassed by the Galapagos tortoises (Chelonoidis nigra ‘complex’) and Aldabra turtles (Aldabrachelys gigantea) in size and weight. Despite its size, or because of the size that they can achieve, these tortoises are very popular and they are compared to other large species considerably easier to maintain and purchase. In captivity this tortoise species does very well and they are bred in pretty high numbers. Despite this there are still many animals exported from their country of origin. As always we would always advise to choose for a captive born and bred tortoise, or any other reptile for that matter. These tortoise get very old and individuals of 80 to 100 years old are not uncommon and because of their size they deserve of a lot of space, so make sure you are able to provide these animals with what they need for a very long time.

General appearance:  As reported, the Geochelone sulcata is one of the largest tortoises. On average their carapace reaches a length of 65cm, but these large tortoises can reach a carapax length of 85cm. The average weight is 60 to 80kilo’s but there are reports of animals in captivity (zoos) that weigh 100-120kilogram. This species can breed from a minimum weight of 20kg. They have a classical tortoise appearance, an oval shaped shell that is a bit flat on top. The overall colour is a light brown. However, there are variations, animals can be light brown to ivory-yellow in colour. Each shield edge has a dark stain, the gradation of this dark colour may vary. Often this dark stain will disappear with age. The front legs have large solid scales. On the inner thigh of the rear legs they have 2 enlarged femoral scales. Where this big turtle gets its common name from ‘Spur thigh’. The gular scutes of the males are big and protrude far forward from the plastron. They use this as rams during their territorial fights with other males and can cause great damage. The goal is to ram the opponent with this throat shields and if possible to throw them on their back or cause damage.

Distribution and habitat:  The Geochelone sulcata has a large distribution area in north central Africa. This range runs like a narrow band from west to east Africa and is just 600-700km wide and more than 8000km long along the southern side of the Sahara. Including Eritrea, Ethiopia, Sudan, East of CAR, Chad, Cameroon, Niger, Benin and Mali to Mauritania and Senegal.

Their habitat consists of fairly dry, sparse and flat landscape that often do not get more then 800mm of rain annually. This is one of the few turtles that can survive in the semi-Sahara. The areas where one can find these tortoises are grasslands, dry sparse planted forests and semi-deserts. The climate is hot and dry, it is not uncommon for temperatures to reach 40C. The temperature normally do not drop below 15C during the night. However, this is depending on the season and distribution. Thus night-time temperatures in places like Mali can fall below freezing at night. During these cold nights, the animals will hide in tunnels where the temperatures are higher and more consistent. The G. sulcata often live in an area around their tunnel until they move away to a different area. They dig a tunnel incredibly easy but will if possible occupy tunnels dug by other animals such as warthogs and porcupines. It is not uncommon that other animals make use of the tunnels dug by the tortoises. They use these tunnels to escape the heat during the day, or cold nights. They dig the tunnels with their big and strong front legs. These caves normally are 4-5meters deep but can be 15 meter long. Keep this in mind when placing the animals outside in the summer. These good excavators often have several dens. Usually two but sometimes even 4. The holes often have two entrances. Large tunnels often have several rooms where animals can turn, sleep or hibernate. The temperatures in these holes are often quite uniform and maintain a constant temperature in the night that is higher than the temperature at the surface. Also the humidity is often a bit higher in these tunnels and dens.

Housing:  Probably the only way to give these animals the space they need. Is by the use of a (heated) greenhouse or shed connected to an outdoor area where the animals can venture into when the climate allows. Naturally the G. sulcata lives mainly solitary but can be well kept in a group of animals of a similar size.

For a group of three adults is an enclosure required that is a minimum of 15 square meters with an outdoor area of ​​15 square meters. With each added animal at least 5M2 needs to be added. Remember that this is a large and active tortoise. The more space you can provide the better.

Heating:  This tortoise loves high temperatures and lots of natural light. The indoor enclosure needs to be heated to 28C with local hot zones of 37-45C. Place several HQL lamps and ceramic heaters in order to create a large heat surface and to meet the high need for UVB. Offer at least two of these basking hotspots so animals can separate themselves from other while basking. The night temperatures can drop to 15C. Which means in most climates people do not need to use additional heat during the night.

On days when the daytime temperature is above 22C you can provide access to the outdoor area. When night temperatures fall below 15C it is best to place them indoors again. Always offer plenty of shaded areas so that the animals can retreat from the hot rays of the sun. In order to prevent the outside temperature to have a big influence on that of the indoor enclosure. One can separate the two parts with transparent rubber flaps. The animals can see through it and will learn soon to walk through.

Construction:  These tortoises are real bulldozers and can easily cause damage and break out of the enclosure when poorly constructed. Glass walls are absolutely not suitable. These will break easily because of all the banging and pulling of these behemoths and when they see what is on the other side of the glass they will always try to go to the other side. The best option is a solidly constructed wall of wood or concrete. Also the outdoor enclosure needs to have solid walls. Screens and mesh will be bent and damaged easily.

As reported spur thighs can dig long tunnels and they do this quickly and easily. It is therefore important that there is a foundation that prevents the animals from digging out. This can be done by means of a strong screen that is placed deep under the ground surface or a whole solid concrete foundation. They often start their tunnel in a place the soil is raised slightly and not on a completely flat bottom. Thus one can manipulate the way in which the animals dig by strategically pilling some earth in some areas. Never completely dry out the soil but it should definitely not be wet. A mixture of earth and sand is best to apply for this species.

Decoration:  Decorate the enclosure with various branches, stems and shelters. These provide visual barriers between residents and can be used by the animals as shelter or to seek shade. U can use this furniture to create paths and corridors. These corridors can be created and changed once in a while to offer a form of enrichment.

Diet:  Pyramiding in tortoises is often the result of two factors, a (to) dry environment or a wrong diet that is either not sufficient, or too rich in certain nutrition’s with a result the tortoise grows to fast. Geochelone sulcata naturally come from a very poor, dry area with lots of grasses. So the diet is very low in nutrients, has little protein and fats and consist mainly of fibres. That's why we want to be careful that we do not give too much and too one-sided diets. So offer the spur thigh tortoise a diet that is rich in fibre, minerals and trace elements. But poor in proteins, fats and oils. So when you buy a tortoise diet make sure it is for grazing species.

The basis for this species consists of 70% dry grasses, hay and herbs hay. You can supplement with many kinds of leaves and herbs like hibiscus (incl. flower) thistles, rose, cherry, dandelion (leaf and flower), chamomile, several blossoms, rose hip, kohlrabi, alfalfa, sunflower (leaf & flower), plantain, blackberry, cacti (without needles ), clover etc. Avoid animal protein, cabbage, spinach and lettuce. Give little or no fruit and if you do this no more than once a week a small amount. Too much fruit can have an adverse effect on the important intestinal flora and cause digestive problems.

Young animals can fed 4 to 5 times per week. Feed adults an average of 3 times a week. Certainly not more if the animals are also able to graze outside and relish on many of planted grasses and herbs. Add a calcium supplement to the greens.

The best way to feed these animals is through a large trough or rack that is levied of the ground. In a bowl, these animals walk through their food. A rack prevents this and keep the food dry and clean.

Water:  This species lives or in a very scarce and dry area. But this does not mean that they have no need for water. They are adapted to extract as much moisture as possible from their diet but will always be looking for water and as soon as they get the chance to drink they will use it. In addition, a good hydration is important for healthy internal organs such as the kidneys. Since we want to offer our animals in captivity optimal care and want to avoid unnecessary trauma to the body. It is important the animals are always provided with fresh water. Soaking helps the animals with digestion and they hydration.