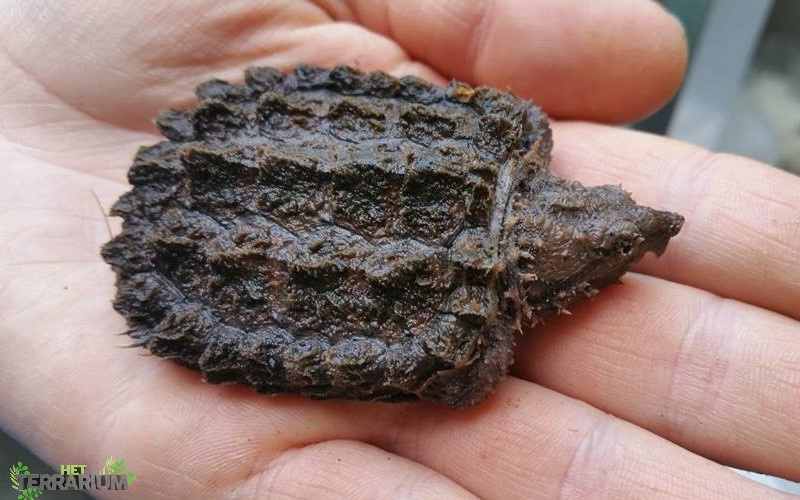 Alligator snapping turtles speak highly to the imagination of turtle and reptile enthusiasts. Their prehistoric appearance and size makes this species very attractive. However because of their size and matching character this big turtle is absolutely NOT suitable for an inexperienced person when it comes to turtles nor for hobbyists with limited space. The Macrochelys temminckii is one of the world's largest and heaviest freshwater turtles. Their bite is very powerful and can cause serious physical damage when handled wrongfully.

Status:  After years of being over collected primarily for their meat, the population of this species in the wild strongly deteriorated to the point that this great turtle was nowhere to be found in many places it ones existed. Since then, these turtles and many other species are protected by law in various states and collecting and hunting is prohibited. Because of this the population now stabilizes and gradually increases. Although just slowly.

General appearance:  As known, the Macrochelys temminckii gets large. On average, these turtles reach a carapace length of 50 cm but larger specimens of 66-80cm with a weight of 50-75 kilos or more are known. These turtles can also get very old. The final age is highly susceptible to speculation. Animals of up to 100 to 150 years old and older are named and there are big specimens found that still have the musket bullets from the Civil war stuck in their shell. They have a large powerful head and jaws designed to overpower prey. The legs are strong to move on the bottom of the lakes and push away from obstructions. The plastron is reduced and the animal is not able to fully retract the legs or head. This is probably one of the reasons for their strong defensive character out of the water. They are unable to retreat in the defence and protection of their shell as one sees in with other turtles. So this is compromised with a strong defensive character to deter predators.

One of the features where the species is known for the worm-like appendage that sits on the tongue. They can move this appendage and it is intended to provoke and attract a hungry fish. The turtle is lies camouflaged among the fallen leaves and branches on the bottom with his mouth open so that the "moving worm” can be seen on the tongue. The turtles lies like such for 30-50 minutes each time. After this they need to take to the surface again to breathe new air. Therefore, this species prefers mainly shallow pools and marshes so they can easily reach the surface of the water. They are real opportunists and not active hunters like the common snapping turtle closely resembling them.

Origin and habitat:  This species occurs in the southern parts of the United States. In Illinois, Indiana, Ohio, West Virginia and Texas, Mississippi, Florida, Louisiana, Arkansas, Georgia, Oklahoma and Missouri.

This species is fully aquatic and is found in many lakes, streams, swamps, marshes and ponds. They seek shelter preferably between leaves, branches and other underwater shelters and live a hidden existence. This species will only come ashore to lay eggs. Sometimes they are found in shallow pools that heat up faster due to the sun. Young Macrochelys temminckii are mainly found in shallow pools and marshes. Where the flow is slow and there are many hiding places and vegetation. Where larger ones can also be found in deeper parts, and in lakes and streams.

Handling:  This species prefers a hidden lifestyle and is very shy. They feel most comfortable tucked away in murky waters between sunken leaves and branches. In the wild this species would only bite in the water when they catch prey or when threatened. Sometimes people step on this turtle without noticing anything. The Marcochelys relies heavily on his masterful camouflage. However, if the alligator snapper is taken out of his comfort zone and lifted out of the water by for example his caregiver. Than the turtle will react very defensive and may try to bite. They open their mouth as a clear warning. The bite of this turtle is very powerful so you want to make sure you handle this turtle in a proper manner. NEVER lift the turtle by its tail, this may cause serious and permanent damage to the vertebrae. The Macrochelys temminckii does not have such a long neck like the Chelydra serpentina. This allows you to grab this big turtle on his carapace just above the head. Approach the turtle from behind the head. And place the other hand on the carapace above the tail. Never lift the turtle longer than necessary and make sure the distance you want to move is minimal. Handling can be very stressful for these turtles. Especially for young individuals so try to keep it to an absolute minimum.

Housing:  The optimum temperature to keep this species at is an air temperature of 24-26C and a water temperatures of 25-27C. Lower temperatures can be tolerated but you risk the change older animals will go into hibernation. Note that a low air temperature can cause respiratory problems. Given these turtles don’t bask they do not need a concentrated (UVB) hotspot. You can, however radiate heat spot on a portion of the water to raise the temperature slightly in a certain, often shallow area. As a result, an animal can thermo-regulate if necessary as they would in the wild by searching shallower areas that are easily heated by the sun.

There are various opinions about the use of a substrate. A substrate (like gravel) can be indigested with feeding and poor maintenance causing accumulation of dirt results in a rapid bacterial growth. Concerns which may affect the health of your turtle. In this case one opts for a bare soil or, for example slate which is easy to clean. But naturally, the alligator snapping turtle is an animal that spends a lot of his time on the ground and likes to hide here. Thus providing a completely bare soil is very unnatural and can cause stress. Therefore, we recommend the use of a thin layer of fine soft (river) sand covered with leaves. Not only dpes this look naturalistic, it also has a positive effect on the natural behaviour and stress level of your turtle. Many leaves as almond leaf have an antibacterial substances and work in reducing mould. These give of tannins which gives the water a more natural darker colour. There is some effect on the PH value (lowering), but this is often negligible. Sphagnum moss can have the same effect.

Use  driftwood, azalea root, or other non-rotting tropical wood to create shelters. These also serve as decoration and visual barriers. The turtles also use this to get to the surface. Optionally you could add large round boulders. Please note that this strong turtles easily push  the stones aside with their powerful legs. In a glass aquarium it can cause the glass to crack with leaking as a result. Furthermore, you can use floating plants to create shade. In addition, the roots of these plants filter nitrates from the water. By adding small water fleas and snails, you create a small natural habitat. Although the snails sometimes will act as a calcium-rich supplement to the diet of a young alligator turtle. With larger animals it is sometimes possible to add small viviparous fish. These are often too small for the big turtle which prefers larger prey.

Young animals should be able to reach the water surface while only stretching their necks from their bottom shelter, no higher than 1x their shell length. As soon as the animals reach a carapace length of 20-25cm u can increase the water depth. Do make sure they always have easy access to a more shallow part of the pond so the animals here can easily reach the water surface to breath new air. Submersed wood can be used as a climbing material to the surface also.

Glass aquariums are really only suitable for young alligator turtles. Large animals require a large deep pond. Young animals can be raised in an aquarium of 80x50 / 100x50cm. In a closed aquarium it is easier to maintain the higher air temperature. Use a background against the backwall to give the animals to give a secure feeling. Larger animals obviously need a lot more space. Often this consists of a large plastic square pond or for example a concrete pond. A good rule of thumb for large specimens is a pond that their is long at least 5 times their carapace length long and 4x their carapace length wide with a water level of at least 0.5x their carapace length but preferably deeper as long as they are able to reach more shallow parts so the animals can easily get to the surface to breath. These terraces are also ideal to hang a ceramic heating spot above so they can thermo-regulate.

It is advisable to place the aquariumheater in the (biological) filtration system. Or to protect it well with a plastic tube as, for example, a perforated PVC pipe. Otherwise these strong underwater tanks will most certainly break the heater. Which can cause all sorts of electrical problems.

A good filtration system is vital to keep these turtles in good health. The diet of these animals can be very polluting. Replace in spite of a good filtration 20-50% of the water every week. Place cotton wool in the filter to focus on floating debris and replace this weekly. It is sensible to use biological materials such as ceramics, lava stone and/or bio-balls. These provide a surface area for bacteria that break down nitrates and ammonia. Also add active carbon to the filtration section. For aquariums with young animals the use of an external canister filter is often sufficient. For large ponds one can best choose a filtration systems with a built-in UVC  filter which are also used in (koi) ponds. These turtles are preferably kept solitary.

Diet:  By nature these are true opportunistic animals and they eat a variety of foods. Mainly animal matter but also some waterplants. In the wild these turtles eat fish, shrimp, lobster and other shellfish and various aquatic animals, including poultry. But everything that fits in their mouths can be seen as food such as other small turtles and snakes or frogs for example.

In captivity you can feed young animals with a variety of shrimp, lobster, freshwater fish (no goldfish), worms, mealworms and other insects. With time these turtles can get used to eating thawed fish from the forceps and some animals can get used to special turtle pellets. Adults feed on larger prey as large freshwater fish, lobster and shrimp and small mammals such as (dead) rats, mice and chicks. We always recommend feeding whole prey above parts as for example chicken hearts, chicken leg, etc. But all of these items can be a nice additions to an already complete diet. Young animals can be fed almost daily, adult animals every other day. Vary as much as possible.