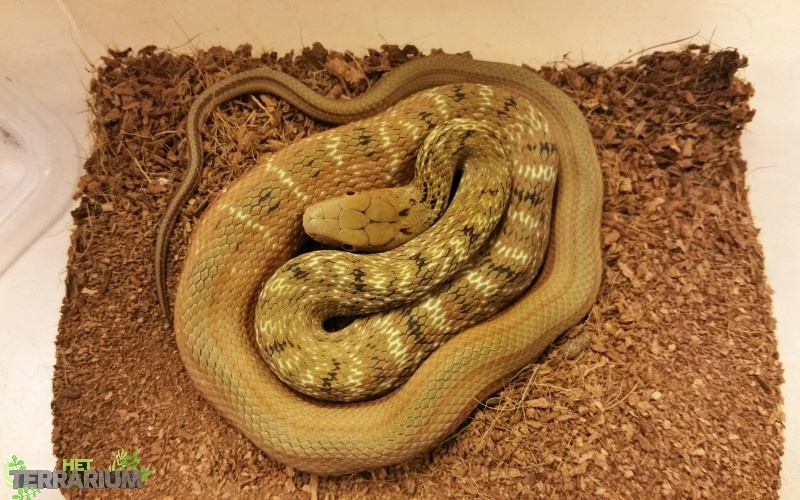 Elaphe carinata is an impressive snake, they are quite large and have a strong sturdy looking body and a matching defensive character. They derive their species name "carinata" from the stench they can produce when disturbed. There are three recognized subspecies with the Taiwanese E. c. carinata as the most kept in the hobby and this sheet is based on the experience with that subspecies. The other two known subspecies are the E. c. yonaguniensis that finds his home on the island of Taiwan and the subspecies E. c. dequenensis that originates from the Yunnan province in China. Especially about this last subspecies there is a lot of discussion if it is in fact a subspecies or just a smaller local form of the E. c. carinata.

General appearance:  They have keeled scales and unlike other rat snakes a teardrop-shaped pupil. Young animals have a very different appearance than the adult animals, mainly brown / grey with a fine dark pattern. Older animals are in basic black with yellow coloration on the scales. Depending on the line the yellow gradation may vary. Some animals stay very black while the ‘high yellow’ animals show some striking colours. On average these snakes will measure 150 to 200cm but big adults can grow up to 240/250cm.

Behaviour:  By nature Elaphe carinata is an active hunter. They are active during dusk and night time and go into hiding during the day between leaves, branches or in a cave. Perhaps the most impressive of these snakes is their behaviour when disturbed. These snakes are known as defensive and will if they feel threatened bite their attacker without many doubt. When disturbed they will posture in the classic S position, spread their mouth wide open and lift the front part of their body from the ground. Sometimes they flatten their bodies vertically so that the yellow coloration between the scales becomes more visible. If this has no avail that they have a second method to ward off their attacker and this is to secrete a strong-smelling pungent musk odour. This musk smells anything but pleasant and will deter most predators.

Origin and Habitat:  Naturally this is a bottom dweller that is located in densely planted, humid forests and bamboo forests. The range of the nominate located in China, Japan and Taiwan.

Housing:  This rat snake is fairly easy to care of. Remember that these animals are cannibalistic so it is best to keep them separate outside the breeding season. They are fairly long active snakes and this means they need plenty of space to roam around. For a adulty a minimum size terrarium of 150x60x60 is needed. For very large animals, we recommend a terrarium that measures at least 1x is their entire length and 0.4 times their length, width and height. Young animals are already considerably large when they hatch and can be placed in a terrarium of 60x45x45 or temporarily in a flat faunabox to raise them.

This species loves to dig through the soil so provide the Elaphe carinata with a thick layer of ground cover. For this, one can use beech chips, Zoomed Forest Floor bed or Reptibark. You can also opt for a natural blend of coco peat, cypress mulch and leaves. Remove waste immediately and replace the soil cover once a month. Misting we would recommend to do 2 or 3 times a week and of course the animals always need to have fresh/clean water available to them. Further furniture include climbing branches, hollow logs and reptile caves and sturdy plants for decoration and hiding. The average temperatures are 22C on the cool side to 26C on the warm side and a hot spot from 28 to 30C. This hot spot can be created by means of a basking spot lamp or a heatingstrip combined with daylight bulbs or fluorescent lighting for proper day / night rhythm.

Diet:  Elaphe carinata has a fast metabolism, especially when they are young. Feed those once every 5 days with a prey (or multiple prey) which is not more than 10% thicker than the thickest point of their body. Adult animals can be fed weekly. Proper feeding items for Elaphe carinata include mice, African soft fur rats, hamsters, gerbil and rats. One can offer variety with fish or for example chickens.