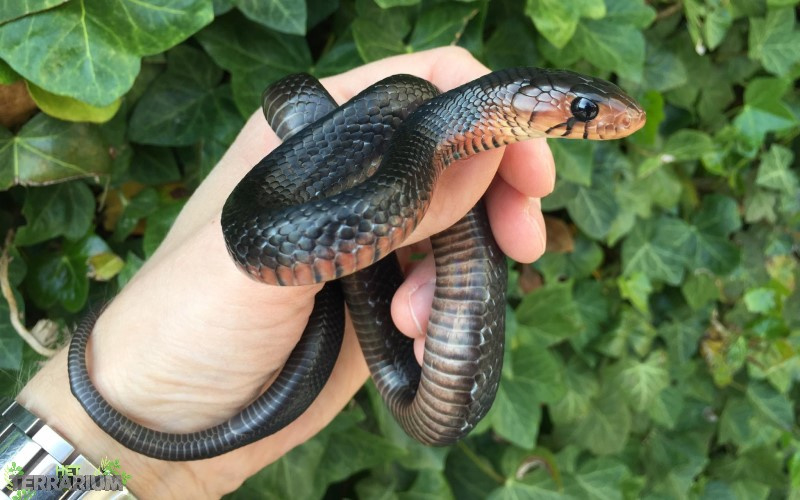 The Indigo Snake is a big impressive snake belonging to the Colubridae. This species is also called the gopher snake because it hides in the tunnels dug by the gopher tortoise (Gopherus polyphemus) Unfortunately, the population of the Gopher tortoise is greatly diminished. This, loss of habitat and poaching for the animal to be kept as pets has greatly diminished the population of the Drymarchon couperi as the Gopher tortoise. The population has declined so immensely that it became protected by the American state in 1978. All the more important that hobbyists do their best to preserve and breed this species. There are many hobbyists who are taking positive steps with these snakes by exchanging information as well as bloodlines to prevent inbreeding and improve husbandry.

General appearance:  The Drymarchon couperi is the longest snake in North America, adult males can reach 260cm but on average get 230-240cm. Females often remain considerably smaller with ‘just’ 150-180cm. These are big strong snakes. There are two forms, the all-black form and the form in which the head and chin are a deep red colour. In some individuals, the abdomen is also this deep red colour. The variation appears to vary by region. Juvenile animals have a light pattern with a blue coloration. This coloration gives the animals their name indigo snake. Adults lose this pattern and their bodies become a deep iridescent black colour.

Behaviour:  The indigo snake is diurnal hunter, they have a very good eyesight and sense of smell. In captivity they are very active and curious snakes. They do not hide a lot and will spend a lot of the time roaming around in their terrarium looking for some food. They seem very aware of what is happening in their environment. Animals that feel threatened will often try to get away. However, if they are fixated they will emit a strong smelling musk scent and often push out the contents of their lower intestines to deter their attacker. However in captivity this behaviour is very rare and if seen at all it is usually with hatchlings who are not used to being handled.

Origin and habitat:  Indigo snakes had a very wide distribution true the United states. But do to habitat loss and over collection for the pet trade their population is greatly diminished. This species now only occurs in southeast Georgia and a big part of Florida. They can be found in a wide variety of habitats from dry scarce areas to humid swamps.

Housing:  This active snakes needs a lot space to roam around. Young animals can be raised in big plastic containers and large flat Exo-Terra Faunarium (PT2310) But they will grow fast and soon need a bigger accommodation. Adults should be kept in a terrarium that measure’s at a minimum 180x90x50. As these are mainly terrestrial snakes a higher terrarium is not directly needed but they will make use of climbing branches when provided. It is advisable to keep these animals separate as they can be cannibalistic.

Choose a substrate that absorbs waste well. This is because of their swift metabolism and plentiful excretion. Wood chips or aspen bedding are dry and dust free, on these types of substrate the faeces are easy to find and clean out. Replace their substrate entirely every month. Place a box filled with wet moss and coco peat. This humid shelter will be used a lot and helps them with the shedding process and when needed to lay eggs. As with all animals plenty of fresh water is needed so give them clean water daily.

Full Spectrum daylight lamps appear to have a very positive influence on the activity and colours of these snakes. Therefore illuminated depending on season 8 to 13 hours per day with a full spectrum fluorescent light with a mild UVB output. For heating and to provide a hot spot you can use ether a basking lamp, infrared heater or ceramic heater. Make sure these animals cannot touch or wrap around the heat source, this cannot only lead to burns but these strong animals can break a lamp or fixture with possible electrical problems as a result. So a safeguard around the lamps is a wise decision. Offer a hotspot of 35C. The air temperature on the warm side needs to be on averaging around 27C to 24C on the cool side. At night the temperature may drop to 15C which means for most keepers additional heating during the night is not needed

This species requires a 2-4 month hibernation at 7-10 degrees Celsius.

Diet:  These snakes eat almost anything and are very food oriented. They are good and active hunters. In the wild Drymarchon couperi eat all kinds of prey including rodents, birds, lizards and snakes as well as fish, young alligators and there are reports that they catch cats and eat young turtles. In captivity, the basic diet consists mainly of rats supplemented with other rodents like mice, hamsters and gerbils. This can varied with chicks, freshwater fish like salmon and for example chicken stomach and heart dusted with calcium powder. Feed once every 5 to 7 days. These snakes eat a lot of relatively small prey and will not react well to a single big prey each feeding. So make sure the food items are not much bigger than the snakes broadest part of the body and rather feed if needed multiple medium sized prey instead of one very big preyitem.