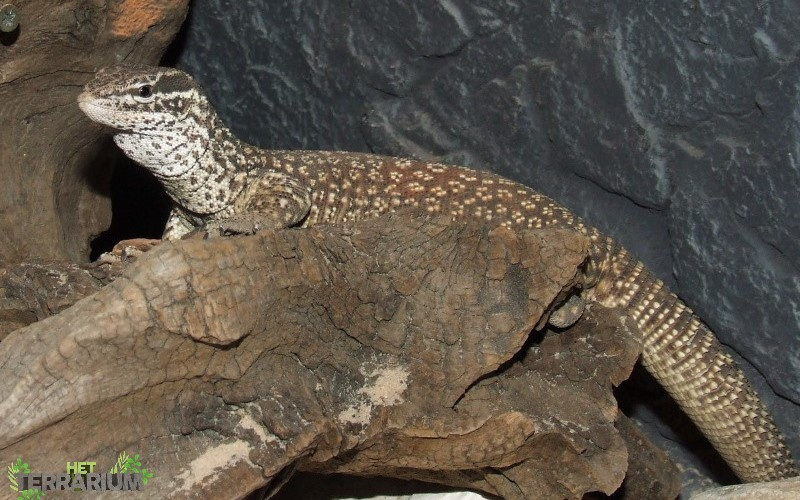 The spiny-tailed monitor is truly one of the most popular dwarf monitor lizards. They have the behaviour and character of a big Varanid in packed a medium-sized lizard. They easily learn to eat directly from the tweezers and are very active. This lizard belongs to the Odatria subgenera.

General appearance:  Varanus acanthurus will measure 50cm to 70cm long. Half of their length is comprised out of the tail. This makes this species a very suitable alternative for the person who likes larger Varanus sp. but does not have the space or experience to keep their big cousins. The tail has sturdy rough scales like small spine, as described in their common name. This tail serves as a protection against predators when they rest between crevices in the rocks. They wedge themselves between in a gap in the rockwall and lay their tail in the direction of the opening. This serves as a sturdy and unpleasant barrier against potential predators. They have a reasonably sturdy body type and have powerful legs which they use for digging and climbing on rocks. The belly has a light colour and is covered with spots. Their body has a base colour that is ether dark brown, pale yellow or almost red and everything in between. On their back they have a pattern of rows of round spots. This pattern extends from the neck to the base of the tail where it becomes a banded pattern consisting out of dark coloured bands and their base colour. The head is often darker in colour than the rest of the body. Along the length of the head they have lines that are very dark to nearly black.

Behaviour:  In captivity these lizards are very active and not shy. They can get used to being handled but young animals will definitely have to get used to this and commonly don’t like to be handled. They are active lizards are constantly on the move in their terrarium and when the opportunity arises elsewhere. So do not expect that this is a species will sit calmly on your hand. A spiny-tailed monitor that is fixated will try to get away and if this fails sometimes try to bite. They have a very good eyesight and use their tongue to 'taste' the area, just like snakes do.

Varanus acanthurus inhabits much of the northern half of Australia. As this species has a large distribution area there is a lot of variation in the phenotype. V. a. Insulanicus limits its distribution to Groot Island and Wessel Island. The northern part where it is present is inhabited by the nominate V. a. acanthurus they can be found from the West Coast to Broome by Kimperleys to the North East portion in the Gulf of Carpentaria. Varanus acanthurus brachyurus covers most of the range.

Their habitat consists of dry semi-deserts to deserts. The only vegetation is dry and sparse. They spend most of their time between groups of rocks where they sunbathe and look for food. Their main predators are snakes and other large lizards. Such as the famous Perentie (Varanus giganteus)

Housing:  These animals are best kept in a spacious and fully decorated terrarium. A pair requires a terrarium of at least 120x80x60cm or 150x60x60cm. The bigger the better is certainly the case when it comes to these active lizards. V. a. acanthurus climbes the most of the two available subspecies, yet this lizard is mainly terrestrial and therefore requires a terrarium with a big floor surface. In very big enclosures one is able to accommodate a male with multiple females. In this case create a lot of additional hiding places and several basking spots. Keep a good eye the group dynamics and look out for any oppressed animals. These signs are often more subtle than just a fight. Do you see an animal that is constantly isolated, does not bask and eats less than this may be a sign of stress and it is wise to separate this monitor

Decorate the terrarium with rocks and many hollow trunks and logs so the lizards can climb and hide in it. Make sure a monitor cannot dig under rocks and possibly get stuck under a heavy rock. So make sure the rocks are secure and there is no substrate between the bottom of the enclosure and the rock they can dig thru, causing a collapse and trapping your lizard. A solid background adds even more climbing options and thus increases the living area. As a substrate you can use a fine terrarium sand. Mix in the cooler zone the sand with a little earth or Zoomed Excavator sand. This may be misted so it is slightly damp and creates a more humid place they can go to when shedding or to lay eggs.

Varanus acanthurus is a real sun-loving lizard and needs high temperatures, radiant heat and have high UVB requirements. To provide them with a adequate basking spot you can best use a HID or HQL lamps with high UVB levels. The basking spot may be 40-50C and they can even be found sunbathing shortly at higher temperatures. Make sure the hotspot spreads over whole their body. If they have a very concentrated beam on just a part of the body they can get burns more easily so make sure the heat and UVB is spread over the whole body. The ambient temperature on the hot side must be between 29C to 35C and the cool zone around 27C. At lower temperatures the digestive system and metabolism slows down and they absorb less nutrients which results in a lower activity and resistance. Which in turn results in an impaired growth and development. Night temperatures can drop to 20C, so additional heating is often not necessary. Expose the animals 10 to 12hrs per day with the UVB lamp. A monitor which is provided a proper basking spot will only bask briefly. Ones their body has reached the right temperature they will go out hunting. If any additional heat is needed you can use a ceramic heater. Full spectrum daylight tubes with high UVA levels stimulate natural behaviours. Although this species gets much of the needed moisture out of its prey, it is wise to always offer a bowl with clean water.

Diet:  Varanus acanthurus has a fast digestion if it is held under the right circumstances, certainly young animals. They are active hunters and their foodresponce is high. They recognize tweezers and a box of food from a great distance. The major part of their diet consists of all kinds of insects and arthropods. In nature this species also feeds on smaller lizards like geckos and skinks. Young Varanus acanthurus may be fed every day with various types of insects, adult animals once every 2 to 3 days. You can sometimes offer a pinky mouse for calcium needs and regularly dust the feeder insects with a calcium and vitamin supplement. If you provide them with a proper UVB source additional vitamin D3 is not needed. Lots of insects can be fed like house crickets, steppe crickets, field crickets, banded crickets, various grasshoppers, superworms, mealworms, dola’s and Blabtica dubia etc. They often love boiled eggs and these full of vitamins. Possibly unfertilized eggs or for example stillborn small reptiles are also eaten. You can sporadically feed small rodents. There are hobbyists who partly feed their Varanus acanthurus with pieces dusted chicken, chicken hearts and chicken stomach.