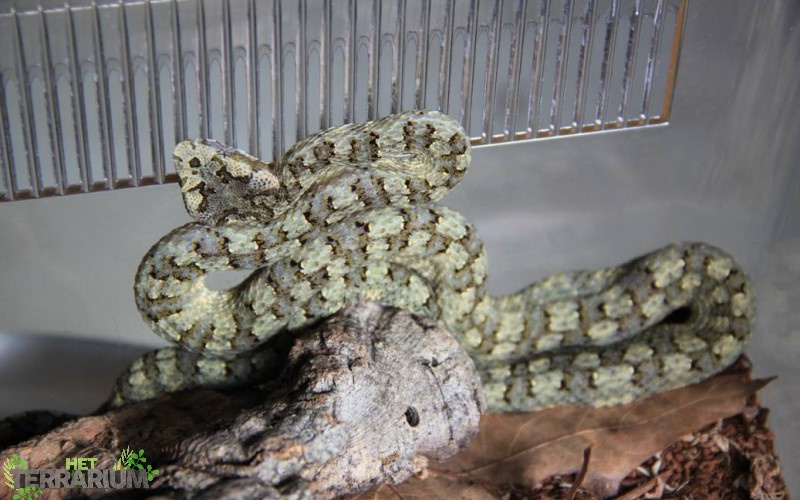 Although species of these ‘Prototype Bothrops’ are not nearly as generally kept as other Asian pitvipers like animals from the Trimeresurus species, Protobothrops cornutus is one of the more ‘common’ species of the Genus in captivity. This probably has to do with the fact some zoological but also private keepers have relatively good success with breeding this species and they seem to do well in captivity and under certain circumstances.

Before you consider keeping these species, there has been very little research done on venom of these snakes, there is no specific antivenin and although not considered to have a very strong venom. Every person can react differently to a bite and every accident must be taken very serious. Please note that keeping a venomous snakes comes with great responsibility towards yourself, the snake and others. In general we advise against keeping these animals but understand some people are experienced and knowledgeable enough to do so in a safe manner.

Status:  This species is actually listed as neat threatened. The populations seem to be stable but are fragile as they live in small regions and prefer a certain habitat. This habitat is declining. Luckily a big part of their habitat is found in National parks. Sometimes this sp. is used in local traditional medicine.

General appearance:  This is a relatively small semi-arboreal pitviper that grows too almost 70cm. They are slender and agile. The head is clearly distinct from the neck, it has a reasonably flat top and viewed from above it is clearly triangular shaped. They have big eyes, one of the features of a clearly nocturnal hunter. Above the eyes they have several raised (normally 2) scales giving them their common name the ‘horned pitviper’. But common names like these can be confusing as more snake species have horns. They have a pale tongue. Pictures attrached to this sheet give a good representation of the colour and pattern of these species. You could call their colours and pattern cryptic, quickly observed certainly not as strikingly coloured as the greens of Trimeresurus sp. This appearance serves them well as camouflage against the rocks and forest floor they reside. Scales are keeled. Between localities the colour may differ a bit. While individuals from the Quang Binh provice have more brows, greens and yellows the animals from QuangDong seem to be paler/lighter and show more pinks along the dorsals. Males are not clearly smaller as females, but seem to be a bit more slender.

General behaviour:  These are almost fully nocturnal and by day will hide in holes, under logs and for most between cracks and in caves in the karstregions which is their preferred habitat. When the sun goes down they become active and will move about. They can hunt prey but prefer to be a true ambush-hunter. Positioning themselves on a small branch or against a tree, just in striking distance of the ground they will wait until a prey will pass. They strike, often let go and will look for the prey after a few minutes. In captivity young will mostly strike and hold one but adults often strike and let go. This may have to do with the type of prey that is fed on depending on the age and size of the snake, not forgetting the season certain preyitems are more active as others.

In captivity they seem to be alert snakes, clearly active during the night. When disturbed they will go in a defensive position fast and react very alert to movement and touch. They are not tend to strike toward this movement unless it has a clear heat signature but will strike aggressively when disturbed to much. They are fast strikers and a bit more ‘calculated’. They will defend themselves when feeling threatened.

Natural range and habitat:  This species is found spread to only certain regions in Vietnam, in captivity animals from the Quang Bing province (Phong Nha-Ke Bang National park) are best represented. They are also found in Quangdong, SaPa and Cuc Phuong National Park. In the Quang Bing province they are living sympatric with the Triceratolepidophis sieversorum, a species that looks and lives similar to the Protobothrops cornutus. In general they are found between 250 and 2000m. above sea-level. Their habitat consists out of mountainous karst regions. In forests with running cool, clean running water. There is some difference in climate between the regions they are found. But we could say they experience a cooler, dryer period and a warmer more humid summer. They live deep in the karst rocks and forest by day where temperatures are much cooler but also a bit more consistent as parts that are touched by the sun. Average temperature of these regions in summer would be considered warm around 25C with maximums on 28-30C. In winter temperatures drop to 10-12C with minimums of 6C. Keep in mind this will vary depending on the region and height they are found at.

Captive requirements:  We would not want to say these snakes are easy. Especially as young they are fragile and this species seems to be prone to dehydrate. But ones settled they seem to be stable feeders and breeders.

Young can be raised in the typical plastic containers or Faunaboxes. As a substrate you can use a cocopeat base with some moss. We prefer this substrate above just papertowl to prevent dehydration and keeping up a higher humidity. Still we do not advice to keep them ‘wet’ and ventilation is very important. Add a waterbowl and mist regularly, we do not like to give a certain amount of times as this will depend on evaporation, humidity of the room, use of live plants or not etc. Make sure the snakes can hide under a piece of cork and have some thin branches to perch themselves on to exhibit their natural hunting method.

Adults can be kept in a glass terrarium or big tub. We like to use terrariums that measure a minimum of 60*45*45cm or 60*45*60cm (Exo-Terra) which are highly ventilated. We do need to state that humidity in our reptile-room is relatively high, and therefor all ventilation is beneficial to the animals. Depending on the season or location of the setup you might want to cover a portion of the fully screened top to make keeping a higher humidity easier. In these setups we again use a substrate that is based on cocopeat earth, mixed with some bark, leaves and moss. As these like to hide lots of cork but also some flatstones are used to decorate. On a personal note it seems that the snakes mostly like to lie on cork, rocks or a branch but almost never directly on substrate unless it is heavily covered by big leaves. They also blend in a lot better on cork and moss covered rocks so it seems logical this is the obvious space to reside. Especially in the evening/night they will climb on thin branches. We like to add some live easy climbing plants like the famous Epipremnum and Scindapsus together with some ferns that can live with a lower amount of lighting. We like to replicate a natural day/night cycle so the terrarium is mildly light with a 26Watt daylight compactlamp. A basking spot that can be used during a small part of the day is only used sometimes in the cooler period by females developing eggs.

Hibernate these animals for two or 3 months at a temperature averaging 9/10C but can fluctuate between 6C and 12C. Notice that the transfer from the cooler period to warm season is relatively abrupt.

Feeding:  In nature these snakes mostly feed on frogs, some small rodents and sometimes a lizard. This means especially young can be reluctant feeding on the typical pinky mouse. These young are hatching while young frogs are abundant so will feed on that during the first period of their life. We could also feed hatchlings with frogs but this can be costly, impractical and wildcaught frogs can be carrying several parasites. To increase the change of a positive feeding response, make sure temperatures are above 17C. Also feed when the lights are off, only a general light in the room as we want to keep it safe with working with these venomous snakes. U can start trying with a life pinky mouse, possibly scented with a frog. Teasefeeding, using a thawed and warm pinky mouse on the end of tweezers. Try to aggravate the snake by bumping the mouse against the tail or body hoping for a biting response. It might take a few tries but when the snake bites and hold on. Gently let go and sit perfectly still not to disturb the snake. Then it can go two ways, ether the snake drops it, or they will start swallowing.

As adults they seem to be more strike and let go hunters. Especially when we feed with live rodents. Feeding can be on a frequency of ones every 2 weeks. They can take relatively large prey compared to their body but a good sized prey items are subadult mouse or young of other regular kept rodents.