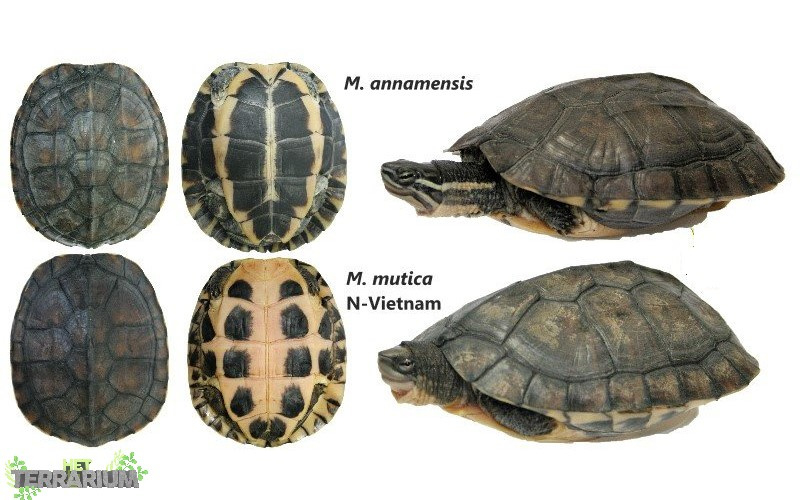 This species is a true testament to the positive influence that serious hobbyists can have on the conservation of species in captivity. Many Asian turtles are seriously threatened by habitat loss and by over-consumption of the wild population by humans, partly to be sold as 'pets' but especially to be used in traditional medicines or to be eaten. As a result, many Asian populations are under great pressure. Many Zoological authorities, associations and individuals have therefore taken on the task of trying to breed with various of these species that have been in captivity before any regulations where in place and we did not know the impact we where having. One of these species is the Mauremys annamensis, which has proven to be a great success. This species breeds easily in captivity and is sexually mature relatively quickly. This has ensured that the captive population has become very healthy and substantial. Some animals were even sent back to the country of origin for reintroduction projects. Now this remains a difficult project if the protection of and cultural developments regarding the eating of turtles in their country of origin do not improve. Yet it is a wonderful example of the positive contribution that we as hobbyists can make. By building and maintaining an insurance colony in captivity in collaboration with authorities to protect them from extinction. Cooperation, sharing knowledge and, for example, participating in Studbooks are an important part of this.

Status: The Mauremys annamensis was described in 1937, after which the animal was only officially seen again in "the field" in 2007 during an expedition in the province of Quang Nam where this species originally appeared. They only knew about the existence of the species by finding it during confiscations and at food markets. All species of Vietnamese turtles are highly protected in the country of origin. It is forbidden to catch animals from the wild or to transport them. Unfortunately, this still happens regularly for the sale of turtle parts for medicines and food. The natural habitat of this species is very densely populated and there are no reserves where this species can be found. The IUCN qualifies this species as seriously endangered and is in the "Top 25" of the most endangered turtle species. Unfortunately a title that one cannot be proud of. Cites has placed this species in Appendix B / II, which means that they must be in possession of a transfer declaration with information about the origin of the animal and the seller. With this species, no Cites documents are required (unless they are imported, which is not legally possible) or be chipped. But there is currently a request to place the species under Cites Appendix 1. This means that animals must be / are provided with CITES documents and you want to be able to breed, sell or transport them. This under the idea of "protection". Unfortunately, Cites is an international organization and guideline, and this will mainly make "traffic" of the species in captivity and therefore also the many captive bred specimens considerably more difficult, while in the country of origin there are no extra measures to protect the species. This can unfortunately mean that in this case the urge to protect the animals will prevent conservation of this turtle in captivity, as some people may not be able to acces the proper documents to get there animals listed at Cites.

There are various projects to protect this species. For example, there are various associations, zoological institutes and hobbyists outside the country of origin that keep up with the specimens and studbooks. Various associations support projects in Vietnam through, among other things, donations and help in the form of resources or knowledge / manpower. The most concrete project was started in 2007 by the Turtle Survival Center in the Northern National Park. Cuc Phuong. This center was built in 1998 by the Asian Turtle Project and currently houses 600 turtles, including almost 200 Mauremys annamensis. The goal is eventually be able to release Vietnamese pondturtles back in their natural range. But due to the dense population growth and therefore the limited habitat and the high risk of poachers if this area is not properly protected, the current chance of success is low.

Natural origin and habitat: Because there are so few natural observations, there is unfortunately also limited knowledge about the natural ecology and habitat that is most preferred. This species occurs naturally in a limited number of provinces in the middle of Vietnam, from the south of Da Nang to Phu Yen. The species is only found in the lowlands. The habitat is characterized by many pools, lakes, swamps, rivers and the streams that connect these. Due to the strong human population growth in this popular area, this habitat is very suppressed by cultivation and pollution.

This species is closely related to the Mauremys mutica and closely resembles the basics. Both species are separated by a mountain ridge and do not occur in the same area. Soon you will also find an article about the M. mutica on our website with, among other things, a clear description about the distinction between these species.

Appearance: the Vietnamese pondturtle is a relatively sober colored medium sized turtle. The shell has a dark brown to almost black base color, the ventrals are moderately raised, resulting in a low keel which decreases as the species ages. In young animals, an unclear length keel can be seen over the pleurals, but this too is no longer visible after a few years. The body is colored dark. The plastron has a light coloring with a dark spot on each shield part, which are often in contact with each other. The most remarkable is the head which has a clear yellow pattern that runs from the nose, over the eyes and cheeks all the way to the neck.

Hybrids: Turtles of the genus Mauremys relatively often cross with other species. Partly because they share an area of ​​origin or are facilitated by people looking for special variants or something "special". As this is a very endangered species, this only detracts from the natural value and is absolutely not recommended. So we also want to prevent this, it would be a shame if hybrids are sold as "pure" annamensis which then mix with pure Mauremys annamensis. Which unfortunately occurs.

Behavior: In captivity the species seems relatively shy in the first years of life. But because they are going to associate their caregiver with food, this will decrease quickly. They are aquatic turtles but will also be found on banks or plateaus for sunbathing. In the event of a disturbance, these turtles often jump directly into the water. The species seems to show little aggression towards other turtles and could therefore be combined with other species from the same area. Of course, avoid the possibility of crossbreeding. Males among each other can be very intolerant during mating season and females are constantly bothered. So keep these separate or in a group with a large ratio of females to a single male in a large pond with many opportunities to avoid each other.

Husbandry: As this species grows larger than, for example, the well-known M. reevesii or M. japonica, this should be taken into account with regard to the size of the aquaterrarium or pond where we are going to house the turtles. Young specimens can be raised in a simple aquarium. The water level in the deepest parts should not be higher than their shield length so that the turtle can easily reach the surface. Add some aquatic plants and spagnum moss to the water to offer hiding places and climbing possibilities. In the middle of a plateau, flat stone or artificial "Reptile cave" one can offer a dry place where the animals can dry and sunbathe. Young animals live more hidden but as they get older they will make more use of this and therefore always offer a basking spot with a heat spot above it. UVB has a very positive influence on growth and development, therefore iilluminating with for example a T5 fluorescent tube with an average UV output (adhere to the manufacturer's minimum distances) is certainly benefitial. Make sure there is always some movement in the water for sufficient oxygen (reduced bacterial growth as opposed to standing water) and preferably use a small sponge or internal aquarium filter.

The water section for an adult pair must have a minimum of 400 liters. Consider for example a size 120x80x40cm for two adults. This turtle can swim well and a higher water level than their shield is long is possible. Make sure there are always some places that make it easier to reach the surface or the dry area. As this species grows older it will spend more time on land to dry, sunbathe and possibly hide. In addition, adult females need a suitable egg laying option. A land portion of 30 x 80 cm that is at least 20 cm deep can suffice. A mixture of sand / soil seems to be highly appreciated for laying eggs. Place a basking spot above the land area so that the animals can sunbathe and some temperature gradients arise.

Good water quality is important to keep your turtle in good health. There does not seem to be a specific water value that is necessary, as long as the water is clean and there is sufficient movement and therefore oxygen. Preferably, you filter the water through an external canistar filter which filters both mechanically and biologically. The water needs to be heated from 18C to 25C depending on the season. Remember that the air temperature deviates little from this and is preferably slightly higher to prevent respartory problems. Offer a good basking area through a heat spot. The use of an HQL or HID lamp that also emits UVB is definitely recommended for this species, especially if you have producing females.

Diet: The Mauremys annamensis appears to be an omnivorous turtle with a preference for animal matter. This includes small aquatic animals such as tubifex, mosquito larvae and crustaceans, worms, shrimp (not the dried ones), mussel, all kinds of insects and (pieces of) freshwater fish. The Zoomed Turtle pellets or Tetra Reptomin are also a good basic food for this species. Green food that is also accepted is endive, tomato, pieces of carrot, various aquatic plants such as duckweed and waterweed and various types of fruit such as pieces of mango and banana, which is best fed only in the rainy season. Snails are a very rich source of calcium and can also be satisfied by offering sepia.

As a conclusion: for anyone interested in turtles, looking for an interesting species and possibly wanting to contribute to the preservation of a species, these species are a great option to keep.