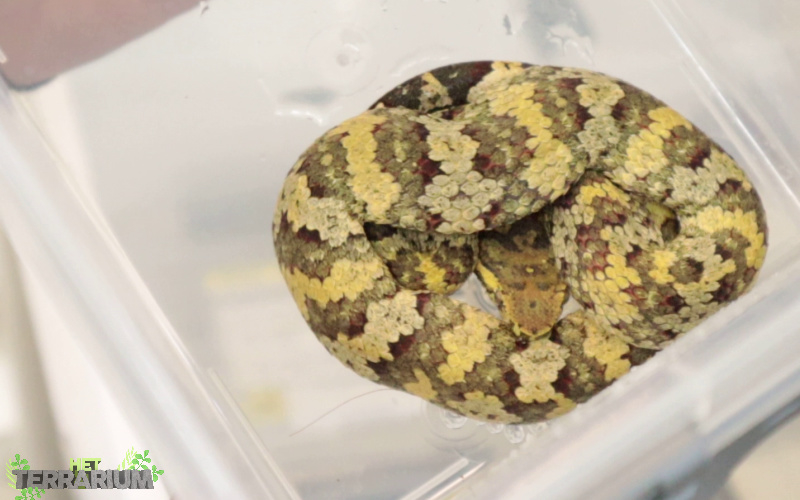 Most species from the Trimeresurus genus are known to be striking coloured, arboreal snakes. But some species live and look a bit more cryptic and live closer to, or on the forest floor. Trimeresurus puniceus is one of those species. This species is closely related to the T. borneensis, T. brongersmai and T. wiroti. Which are all much less common in captivity. This has mostly to do with the lack of export of and interest in this reasonable drape looking snakes and the fact that many did not acclimatize well to captivity. To us Trimeresurus puniceus is a very interesting and great looking snake.

General appearance:  The general body-type of this species is in the basis similar to many of the arboreal Trimeresurus species. The head is well defined from the neck. The neck is slender and also the body is long and slender. But they do have a more heavy or broader body-type then most of the arboreal species. The head is relatively big, especially those of the females, and has a long triangular shape. The front of the head is a bit flat and pointed, but does not have the well pronounced horizontally flat, raised scute or scale as can be seen with the Trimeresurus wiroti. On the snout, from the upper till bottom lip a clear light line is visible. The overall body colour can be very variable. Most specimens seem to have a (light)brown base colour with a darker brown pattern of unregular bands and blotches. Most of the time the bands do not extend on the sides or ventrals. But colours can differ from orange, reddish till yellow and even pale grey. Expected is that there is a form of dimorphism between the population of Java and the lesser known and kept Sumatran species. But this is not described or studied well enough to make a clear statement about. The ventrals are light with an often dark chaotic pattern. Males are easy to distinguish from the females, they have a more slender body, smaller and less triangular head, more contrast and colours in the pattern (especially as young) and stay smaller. Adult males will normally measure 60-70cm while females can measure 100-130cm in length, making it one of the bigger Trimeresurus species. The tail of the males is clearly longer and has a broader base behind the cloaca.

Natural range and habitat:  Most specimens in captivity originate from Java and sometimes Thailand. But this species can also be found in the South/Eastern parts of Malaysia, on Sumatra, Borneo, Mentawai islands. There is not a lot of information about their natural range. But they seem to prefer to live in humid sub-tropical or tropical forests with a thick vegetation. Elevations can differ between almost sealevel and 1450M. This makes it harder to select the proper temperature gradients. But we can assume they prever (sub)tropical tempatures. Little difference between temperatures in seasons but experience a clear rainseason. Also we must realize temperatures are more stable but often lower on the rainforestfloor compared to the canopy and less vegitated areas along forest edges.

Behaviour:  Trimeresurus puniceus mostly has a foul temper. None of the species in the genus can be called  ‘calm’ and most are defensive. But the T. puniceus will not hesitate to strike when they feel anywhere near threatened. Bites are often prolonged and strong and they have long teeth. Luckily this species is not responsible for many bite incidents in their natural range as they prefer thick (tropical) forests, are nocturnal and do not come in contact with people often.

It is an almost strictly nocturnal species that hides between leaves and bark on the forest floor. They are not active hunters but very accurate sit and wait predators. When the sun sets they will often climb on top of a log, lay between roots or hang on a low branch with their head pointed down waiting for a prey to pass. This species is mostly terrestrial but can climb very well and will do so. In the terrarium they will hang in branches, especially after a good misting.

Venom:  The venom is mostly heamotoxic and although most bite accidents are not fatal, permanent damage on and around the bite-area is very well possible and we cannot neglect the risk of a possible allergic reaction.  This species has a big head, long fangs and delivers a lot of venom. The effects start fast and strong after an uneventful bite accident. Effects include local bruising, intense pain, swelling, bleeding, nausea and headaches. In the second stage local necrosis, tissue damage and damage to blood(vessels) will occur. This can also have a negative impact on the kidneys and liver. To prevent any major permanent damage to the bite site of appendages quick treatment is needed. There is no specific antivenim for this species but some suggest Polyvalant Green pitviper antivenin has a good effect.

Housing:  it is absolute best to keep this species separate and only place a pair or more snakes together during breeding season. Not only do we want to avoid the fact we need to divide our attention between two venomous snakes in a compromised space, this species also has a long striking range and will not hesitate to bite when they see movement, especially when they think a prey is near. It is not uncommon they will bite another occupant of the terrarium in a feeding response. This species is immune to its own venom so most of the time a swelling will soon disappear. But a tooth can hit an eye, critical nerve or vain risking permanent damage or death of the snake that gets bitten by its enthusiastic responding roommate.

Because of their relative inactivity they do not need a lot of space to roam. Most adult females, except for very big ones, can be kept in an Exo-Terra glass terrarium of 90x45x45 or 90x45x60. We like these terrariums for most of our smaller venomous snakes as they close well, have a lot of ventilation and heating and lighting can be placed outside the terrarium. But any secure, well lockable enclosure will do. Always place the terrarium in a secure room to have an extra barrier may a snake get out. This will also prevent any other or people or pets to unlock or damage the enclosure. Adult males can often be kept in a similar terrarium of only 60x45x45 or 60x45x60, again depending on the size. Keep in mind this species is ovoviviparous and freshly born young are very small. In a regular terrarium with sliding doors they can escape via the gap between these doors. So make sure you close this gap to prevent any problems. T. puniceus and other (pit)vipers can fertilize several clutches from a single mating.

Depending on your own preference you can setup the terrarium rather basic, with reptibark as substrate, some reptile caves for the snakes to hide and branches and maybe some live plants in pots for the pitviper to climb in and on. This setup is better to oversee and observe and for the snake it probably does not matter as long as there are enough hides etcetera. But one of the most important things in keeping this species is a high humidity, 70-90% (but still make sure there is enough ventilation). In a more natural setup, with a thick layer of substrate that consists of cocopeat, bark and leaves and maybe some moss this is much easier to maintain. We have tried and tested both methods, young we like to keep in a Faunabox with a layer of moss on the bottom, a small waterbowl and hide and many small branches to climb on. After that the animals get moved to a more natural setup. We prefer to use a 10cm thick layer of the more natural substrate mix and plant lots of live plants like Hoya, Epipremnum, Ficus species, Asplenium and other Asian low maintenance plants. We never needed a drainage layer but it can be a good option when you mist a lot. With vines, branches and cork we create lots of places to hide and climb. Some bamboo gives the terrarium a more ‘Asian’ décor. Always provide the animals with a waterbowl with fresh water, that being said many T. puniceus prefer to drink water from the decoration and themselves after a nice misting, Adding springtails, worms and arthropods to the substrate will aid in keeping the substrate clean and aerated.

This is a sub-tropical species and it prefers moderate tropical temperatures. There is not a big difference in day and night temperatures. Overall air-temperature by day can measure 26-28C with a slightly higher hotspot that mostly only females will use during gestation or after feeding on a big prey. Night-temperatures can drop as far as 20C and sporadically even lower. This species is hardy and will tolerate seasonal higher or slightly lower temperatures but prevent any extremes. This species lives on the forest floor of thick tropical forests and therefor does not bask but moves between small microclimates in their habitat. So using a strong basking light is not very natural. We prefer to use a heating mat or strip against a part of a side wall of the enclosure. Heating the air to a needed temperature and the animal can move closer or away from it. A heating strip below the setup can also be used but this is less natural as they will not make use of warm rocks etc. in their natural habitat. It will also dry out the substrate so this method can probably only be used in a simple (quarantine) setup. As additional lighting we use a fluorescent daylight tube that extends above 50/60% of the terrarium. This is mostly for all the plants and to be able to observe the animals and create a natural day/night cycle.

Diet:  The natural diet of this species will differ upon age and season. But will mostly consist of small rodents and other mammals, birds and frogs. Young T. puniceus have a high perseverance for small frogs and lizards and some specimens have been observed catching small bats.

In the terrarium young T. puniceus therefor may take a short while to get started on baby mouse. But with a bit of tease-feeding or feeding live baby mouse they will often will start eventually. Their natural foul temper helps in this case. Ones they feed there is almost no stopping them. Feeding this species with mainly mouse their entire captive live does not give any health issues but some variety with other small rodents and when they are big enough (quail)chicks will also be possible. Feed young individuals and gravid females ones every 7-10 days. Adults can be fed every 14-30 days depending on the size and amount that is fed per feeding. Males have the tendency to skip meals, especially during breeding season. Females will often only skip a meal if they are ether sick, or at the last part of a gestation.

Conclusion:   As always we must not forget these are venomous snakes and the hobby contains probably more than enough interesting and beautiful snakes that do not pose a potential threat like these. But for those who are experienced with pitvipers alike and that can look past the lack of bright colours this species is a joy to keep. The have an impressive head and attitude and will look great in a natural setup.