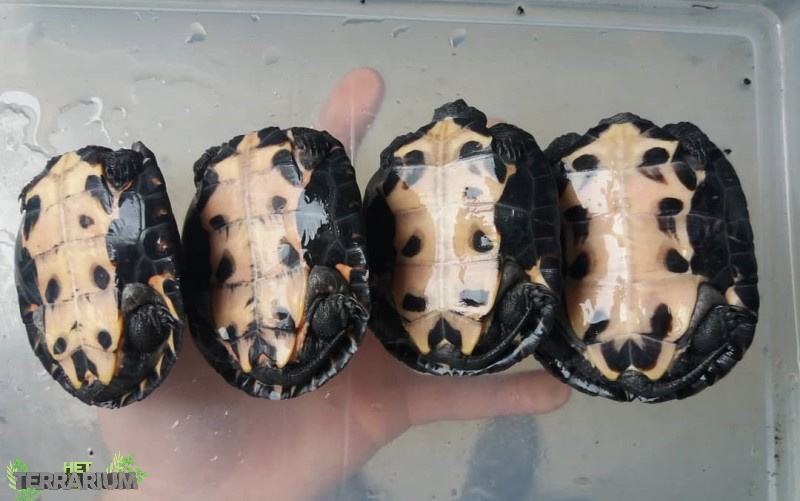 In the past, the interest for Mauremys nigricans was not very high. The species has, apart from the red coloration of some males (which is mainly evident in the mating season), few remarkable features and in the same area more interesting species were found, therefor M. nigricans were mainly seen as "by-catch" and exported cheaply to be kept as pets. In the meantime, the demand for turtle components for the Chinese food market / medicine market increased and, unnoticed, this over-consumption led to a drastic fall in the natural population. To such an extent that since the 1930s / 40s there has been no official documentation of an observation of M. nigricans in its natural habitat. This species is on the IUCN red list as "endangered." Nowadays the demand for, and with it the price, for this species seems to have increased considerably. Nevertheless, the Kwangtung red-throated turtle is not protected under Cites. As a result, the local protection of the Chinese government in the country of origin offers little protection once the turtle has been crossed the border. This development has ensured that more serious enthusiasts are concerned with the species, in order to increase the breeding results in captivity. Now there is a healthy population in captivity, at hobbyist, zoo’s and the turtlefarms. This population is much greater than the wild population. Making sure we do preserve the species, but local protection is needed to ensure the survival of this species, and many others, in their natural range.

External characteristics: the M. nigricans is closely related to the well-known Mauremys reevesii but is fairly easy to distinguish. The three keels that can be seen on Mauremys reevesii young are not present with Mauremys nigricans, they only have a moderate keel over the ventral shields which disappears as the animals age and grow. M. nigricans has a clear red plastron at birth while the M. reevesii is dark brown to black. As the young M. nigricans grow older, this red coloring on the plastron becomes considerably less intense. The overall shell color of M. nigricans is dark gray to black and they have a similar body color. A fine pattern of lighter lines can be seen in the neck and over the head. The shell shape is quite typical of many well-known species of the genus Mauremys. There is a clear distinction between male and female specimens, males stay considerably smaller. The head, front legs and neck of male animals can have very red markings, especially in the breeding season, the females do not show this. The eyes of male animals often show an orange-colored border, while that of the females matches their body color. The plastrons have the same dark brown coloring, but the males plastron is (only) slightly concave to facilitate the mating position. The cloaca is also placed further outside the shield so that the man can surround the woman's shield.

Within Mauremys nigricans two variants can be distinguished, the smaller variant that occurs in Guangdong (15-20 cm) and the so-called large head also known as "bighead" or Dumbhead that occurs in Western Guangxi. These animals are slightly larger (20-30 cm) than the variant from Guangdong and have a clearly larger head and jaws. The scientific name for this enlarged head on turtles is called "megacephaly". This variant is considerably less common than the "normal" variant and is very rare in the wild as well as in captivity. In addition to the larger head and size, this variant is a lot more territorial and intolerant to other peers. In proportion, the small variant lays "small" clutches with relatively larger eggs. While the "big head" variant produces large clutches with relatively small eggs.

Hybrides: There are several hybrids known, we found documentation of crosses with: Mauremys reevesii, Ocadia sinensis, Cuora amboinensis and Mauremys annamensis. And even if sometimes these hybrids can look very nice and spark our curiosity. We would never advise to try and make these, as many of these animals are either vulnerable or even highly endangered. It would be a shame to get crosses that resemble a certain species too much, polluting the species lines.

Behavior: the Mauremys nigricans is a predominantly aquatic species that prefers shallow, slow to moderately flowing pools. In some literature it is reported that they are remarkably weak swimmers and it will be observed in captivity that especially young animals rarely swim, but move more over the bottom. As the turtles grow older they will be in more deeper parts. It is a species that is active in the twilight and during the day and likes to sunbathe on sandbanks or broad trunks near the water. This allows them to dive into the water quickly in case of disruption. Also in captivity especially young animals are very shy and they like to hide in a hiding place, under trunks or between plants. As the M. nigricans grow older, this shy behavior decreases somewhat, but the species remains on its guard.

Origin and habitat: The distribution area of ​​Mauremus nigricans is limited to the provinces of Guangdong (formerly known as Kwangtung) and Western Guangxi. After the discovery of a skeleton on Hainan, the suggestion was made that the species also appeared or came here. Unfortunately there is no confirmation of this. Reports from Northern Vietnam and Fujian cannot be confirmed. In addition, the question is whether this concerns wild populations, or animals that have been released from the living animal markets in China.

Unfortunately, little is known about this species in its natural habitat. As it seems, they prefer slow to moderately flowing pools, streams and swamp areas fed by the mountain streams. It is a species that mainly occurs in lowland areas and has a lot of sun. There is little difference between the seasons although the summers are sometimes very hot. These turtles do not experience a real winter and winter rest or hibernation is not necessary. The humidity is high throughout the year and there is no clear wet and dry season.

Husbandry: the overall care of Mauremys nigricans is not very complex. People want to think in particular that adult females have enough space at their disposal and there is room for extensive sunbathing. The animals can be housed per pair or group, but keep a close eye on the mutual interaction. Males can also be very intrusive towards females outside mating season and intolerant towards other males. This can cause stress, so it is wise to house the males separate. Females can also be territorial to each other, to a lesser extent or not. Therefore, provide sufficient space, shelters and additional basking options.

Young specimens can be raised in a simply decorated aquarium with a water level no higher than their shell length and well filled with plants and moss so that the young can hide and rest between them. By focusing a heat spotlight on a floating piece of cork you can offer a basking spot. Provide additional UVB lighting with a compact lamp or UVB fluorescent lighting. Filter the water with a sponge filter connected to an air pump and replace (part of) the water every week.

For two adult Mauremys nigricans a MINIMAL water area of 120x70x25 is required, preferably larger. For each additional animal, a minimum of 100 liters of extra space is charged. In a large pond, the species also seems to combine well with other species of turtles from the same areas. Note, however, that one wants to prevent hybridization.

The sunbathing area for males or immature, non-egglaying females can consist of a floating / hanging plateau or large trunks on which the animals can easily climb. As soon as adult females are accommodated and a breeding attempt is made, the land section must consist of a sandpit of 30x70x25cm (aquaterra of 150x70x70 with land section is a solution for this). This deep sand is necessary for the females to lay their eggs. It is very important that this species has sufficient basking and dry space. Keep this in mind with the design and layout of your aqua terrarium or turtle pond.

The sun spot must consist of a good quality HQL or HID lamp that radiates heat, light and UVB. This is necessary for the healthy growth and development of your turtles. To simulate a day / night rhythm and to stimulate further natural activity, one can additionally illuminate with UVA / daylight fluorescent tubes. Depending on the season, people illuminate 11 to 13 hours a day. When needed, for example if a group is housed together, it is wise to offer several baskingspots, so that one can aim at a protruding trunk above the actual land area and one above the water. The temperatures under the sunspots can reach 32-35c. The air temperature must be between 27C and 24C, depending on the season. The water temperature may not deviate far from this (26-24C) to prevent respiratory problems. The temperature may drop during the night, but do not expose the animals to temperatures below 20 / 18c for a long time. This species does not need a natural winter rest or hibernation.

Proper filtration is very important when housing turtles. Many turtles are real polluters due to their diet, way of eating and feces. Preferably you use an external mechanical and / or biological filtration. Place a pre-filter before the intake of the filter to sieve coarse dirt from the water before it enters the filter. By regularly rinsing or replacing this pre-filter, your filtration system stays clean longer and more room is needed for biological filtration to keep the water free of contamination. Replace part of the water every week for up to 14 days.

The further decor can be kept scarce. The bottom can be kept bare or covered with a fine filter sand that you regularly churned. With driftwood, Azalea or tropical rootwood you can further design the water part and offer hiding and climbing possibilities.

Diet: For Mauremys nigricans, the well-known good quality food for turtles, such as Zoomed Natural Turtle Diet and Repashy Savory Stew, are a good basis, but you always want to vary upon this. Young animals are predominantly carnivorous. As soon as the M. nigricans get older, they also partly feed on green material. Feed young and half-grown specimens 4 to 6 times a week, older animals can be fed three times a week as much as they can eat. In addition to the well-known granules, you can feed on red mosquito larvae, artemia, tubifex and other small aquatic animals, (bits of) earthworm, sporadic pieces of beef heart enriched with a calcium supplements, smelt, roach, crickets, mealworms, morio worms and other insects, mussel, shrimp, waterweed , banana, carrot etc. Sometimes try new things to see what your animals accept and remember that turtles sometimes have to get used to new food.