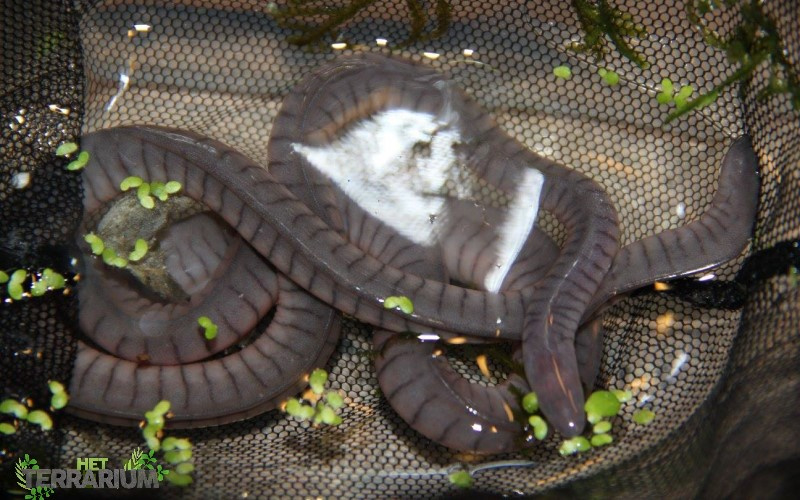 There are currently 205 described species of worm salamanders which are part of an ancient group of amphibians where little is known about. This is mainly due to their hidden lifestyle. Most species live ‘on the land’ but there are also various (semi) aquatic species including the Potomotyphlus kaupii that is part of the Typhlonectidae Family. The Typhlonectidae Family is divided into 5 genera, 1) Atretochoana, 2) Chthonerpeton, 3) Nectocaecilia, 4) Potomotyphlus and 5) Typhlonectes. All these genera occur exclusively in South America, to the south of the Andes. Of these 5 genera, the Potomotyphlus (kaupii) and Typhlonectes (natans and compressicauda) are almost completely aquatic. Of these species the Typhlonectes natans is most kept and sometimes bred and the knowledge gained with this species is often used as a guideline for the care of other aquatic species from South America. The Potomotyphlus is sometimes offered in small numbers. There are no successful stories known to us about breeding’s of this species (yet).

General appearance:  The general term ‘wormsalamander’ already gives some indication of the features of this amphibian, they are elongated, cylindrical shaped and legless animals. On the back of the Potomotyphlus a flat crest of flexible skin is present that aides with the swimming. This crest starts right behind the head in the neck and becomes ever higher as it reaches the tail. The head is pointed and barely separated from the neck. The eyes of these wormsalamanders are small and seem underdeveloped. The mouth is relatively small and these animals also eat very small fooditems compared to their size. The cloaca is at the end of the tail. Females have a pointed tail with a narrow elongated shaped cloaca while the tail ends of the males are wider and rounder and they have a round shaped cloaca. Their body colour is a light grey with sometimes a bluish hue. On their sides they have fine dark-grey coloured lines. The belly side is lighter in colour than the rest of the body. The skin is smooth and has a mucus layer. In the literature an average length of 30-60cm is indicated, however, captive specimens of almost 75cm are known.

Natural origin and habitat:  The Potomotyphlus kaupii is actually very common in Bolivia, Venezuela, Peru, Ecuador, Colombia and Brazil (up to 500m). Here they are found in the rivers, streams, lakes and marshes of the Amazon and Orinoco river delta's. This environment is characterized by a dry and wet season that affects water levels and water quality (mainly pH value). The water is filled with dead leaves and wood and therefore has a distinctive tint of brown colour, created by all the tannins that are emitted by the sunken leaves and wood. The P. kaupii that are sometimes available are mainly from Peru.

Behaviour:  These wormsalamanders live a hidden existence. They mostly reside between the mud and layer of sunken leaves on the bottom of pools, lakes and streams. Most activity takes place in the evening and night when they are sometimes found in shallow pools during their search for food. During the day the animals are hidden and only reach the surface to breathe. Their sight is very limited and they rely mainly on their smell to find food in the cloudy water. In the aquarium they appear to be active and they can quickly get used to any movement in front of the aquarium.

Diet:  Aquatic worm salamanders are both active hunters and scavengers. They rely mainly on their good sense of smell during their search for food which they find on and in the bottom. Most of their diet consists of all kinds of worms, insect larvae, small water insects, shrimps, amphibian larvae and their eggs. Large populations have been reported near fish processing companies where they feed on the intestines and other residues that are discharged into the water. One can assume that these animals also eat remains of mussels, snails and other dead materials in the water.

In captivity the animals would feed on average 2 to 3 times a week. Freshly caught animals initially eat live food but seem to learn to also feed on thawed food quickly. Probably because they in the wild are also scavengers and used to eating dead material. Especially blood worms (red mosquito larva) and (pieces) worms are the big favourite. Other materials you can feed are finely sliced ​​mussel and shrimp, various other types of mosquito larvae, artemia and tubifex. Try to vary wherever possible. If your new wormsalamander does not feed it is advisable to feed them when the lights are switched off. During this period the wormsalamanders are significantly more active and you lose the risk of excessive leftover food and the system pollutes. Also check the conditions of the water to assure there is not another reason they do not feed.

Husbandry:  Because there is not a lot known about these wormsalamanders and skin problems often occur we recommend these animals only for experienced individuals who are both experienced in amphibians and have a solid experience with aquariums.

Despite their hidden lifestyle these animals are very active during the night and therefore deserve a spacious aquarium. For three specimens an aquarium of at least 100x50x50cm is required. This species can be housed in larger aquariums in larger groups and animals often seem to share shelters. This increases the potential for breeding successes and larger aquariums are more stable. The water level may vary depending on the season therefore, an aquarium of at least 50cm is required. On average the water level should be 30cm to 40cm deep and ensure that there is always space above the water surface for the animals to breathe. Make sure the aquarium is properly sealed to prevent any escape.

The water:  The water temperature should be on average 26C. There are good experiences with temperatures ranging from 24C to 28C. Heating can be done with an aquarium thermostat when necessary. Cover this heater well to prevent the wormsalamanders from coming into direct contact with the heater and risk burning. When using an external biological sump filter there is often room for the heater to install. Filtration must be done with an external filter (with some overcapacity) to process all the dirt that these animals produce. Good water quality is a must, when the water is too dirty you increase the risk of skin ailments. Make sure the animals cannot crawl into the intake of the external filter so cover it with a fine mesh or pre-filter. Ensure an moderate flow of the water. The average pH value should be 6.5/7pH but may decrease to 5pH. The decrease in pH appears to be one of the stimulants for propagation in Typhlonectes. The water must be slightly "soft", when the hardness passes 5.0 / 5.5dH this can be very harmful and lead to the death of your wormsalamanders.

Light:  Illuminated on average 12 hours a day for a natural day/night rhythm. Lighting can be done with low wattage fluorescent tube. Remember that these animals live very hidden and will avoid bright light. Therefore, provide adequate shelters and equipment that create shady places.

Decoration:  Potomotyphlus kaupii is mainly active on the bottom and only swims to the surface to breathe. It is not actively swimming around but does ‘climb’ on and over various obstacles. Decorate the aquarium with many pieces of tropical roots and plants, providing enough shelter. Using floating plants offers more shade. Preferably float some pieces of corkbark on the surface, this offers even more shade and here the Potomotyphlus can rest outside the water if they want to. Typhonectes natans are known to spend much time in such resting places but we have little record of this behaviour in Potomotyphlus.

The substrate:  This digging inhabitant can best be given a substrate of fine-soft sand, the animals really like to dig in this so make sure you use an adequate layer to do so. You may use round pebbles and stones to decorate a bit further. Make sure that the animals cannot crawl under and move stones that can cause the animal to get damaged or cause damage to your aquarium. Do not underestimate the power of these animals, they may look like a oversized worm but their bodies are very strong and they easily move stones and other devices, pushing them away with their coils. Cover the substrate with dead leaves, (sphagnum) moss etc. These natural materials reduce the hardness and pH of the water and give it a more natural coloration. In addition, many leaves have a bacterial and fungal inhibitory effect. The leaves serve as food for many microorganisms that help keep your aquarium clean.

Maintenance:  In order to provide a stable water quality and prevent any excessive waste a (partial) biological filtration is highly recommended. However, it is wise to replace a part of the water once a week to prevent waste accumulation of debris. Preferably use a vacuum cleaner that removes the water from your aquarium via the substrate for such a change. This prevents waste collection in the soil and removes a part of the water. Replace on average 20% of water per week. Preferably, you replace a small percentage several times in a shorter period than a large part with longer pauses in-between, which prevents excessive fluctuation in water values. Use water testers to ensure optimum conditions and timely response to deviations. Use a water preparatory media like the Easylife filter-medium to neutralize any harmful substances in tap water before adding this water to the aquarium.

Adding fish:  Potomotyphlus mainly feeds on small invertebrates and carrion, it is not an active swimmer and has a bad sight. Therefore, it is possible to place various fish in the aquarium. These can possibly eat residual waste and if necessary algae. It is advisable to use only friendly non-territorial fish with a small to medium size. When feeding, note that the fish do not eat all the food of the wormsalamanders quickly. Of course you only want to use fish that also occurs the same biotope and have the same origin. Think of various Apistogramma, tetra species, neons, sword-tails and guppies.

Handling/Moving:  Never handle amphibians with your bare hands, our hand can contain various substances that can be absorbed by the animals through their skin and can be harmful. Therefore always wear latex gloves and replace them in-between other animals to prevent cross contamination and viral spread. Potomotyphlus does not like to be handled and will swim away quickly when threatened. When handled the animal will move back and forth and possibly damage themselves. Therefore it is wise to move these animals with a large fine-mesh fishnet. Possibly you can place a hollow lockable hide in the aquarium that is easy to lift out of the aquarium.

Reproduction:  There is very little known about reproduction in the wild and also in captive breeding with the Potomotyphlus kaupii has not yet been successful. All aquatic wormsalamanders are viviparous. The pregnancy takes an average of 6 months after which a small litter of 2 to 5 young is born, these babies have long external gills. Mating activity appears to occur mainly during the dry season when the temperature rise, daylength is longer, the water level drops and the pH value drops.