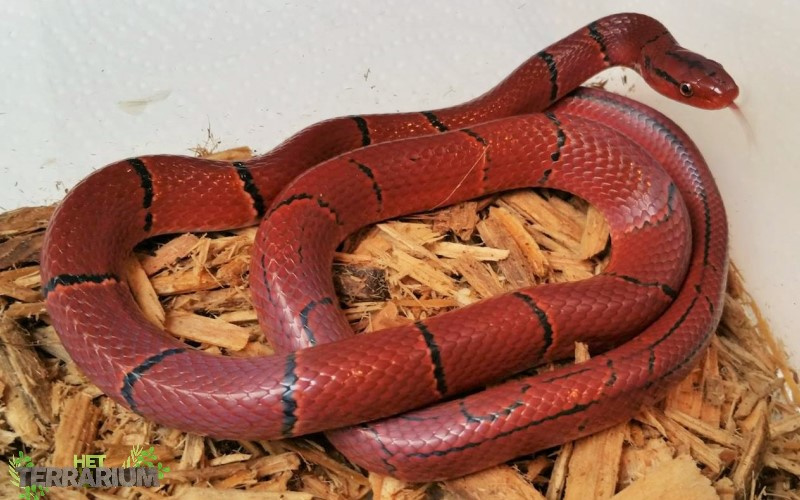 The Oreocryptophis porphyraceus also known as the (red) bamboo snake is a relatively small and reclusive living snake. They show great colour and each subspecies has an interesting banding or striping. Of all six currently recognized subspecies of wish the nominate species was first described by Cantor in 1839 (type local Mishmi hills, Assam, India) four are kept and bred regularly in captivity. Being the Oreocryptophis porphyraceus coxi, O. p. laticincta, O. p. vaillanti and O. p. pulchra.

General appearance:  On average this species get about 50 till 110cm depending on the subspecies. Bamboo ratsnakes have one of the most striking colours and patterns that can be found within the Asian ratsnakes. They look quite similar to the venomous Sinomicrurus they share their habitat with. Their body is slender and has a smooth scalation. The head is not much divided from the neck and bodyand is also slender and has an oval shape. As these are mostly nocturnal snakes their eyes are very well developed. The belly is cream till white and has no obvious pattern. The overall body colour is a bright till deep dark red depending on the species. The patterning of adults can consist of black (fainted) bands (pulchra / laticincta) black lines (coxi) or a pattern of thin lines along the whole length of the body with a faint blotched pattern. Hatchlings look sometimes very different then the adults and have much brighter colour and a more distinct pattern. Oreocryptophis porphyraceus coxi is the only subspecies where the adults and hatchlings look almost identical. The thick black banding that is seen in hatchling O. p. pulchra will lose a lot of the black in the middle of the bands. O. p. vaillanti and O. p. laticincta hatchlings show the most dramatic difference in colour and pattern compared to the adults. In captivity it normally takes 12 till 24 months for animals to change to their adult colour and pattern.

General behaviour:  This species lives a very reclusive live. They are nocturnal, dig a lot and like to hide between the leaves and branches on the forest floor. Here they actively hunt for small preyitems. When feeling threatened their first reaction will be to crawl away and hide. When they cannot get away they will raise the front half of their body of the ground and go in a classical S position while twitching with their tail against the ground and surrounding objects to great a distracting noise. When provoked from this position they will try to bite. In captivity these snakes keep some of this behaviour and don’t like to be picked up.

Natural range and habitat:  The six known subspecies are found in a wide but very fragmented range in Asia. All subspecies prefer very humid, wet and relatively cool microclimates in (secondary) forests and bamboo forests. Often with a thick layer of branches, mosses, fallen trees and branches covering the ground. They are also found in mountainous (karst) regions with lots of rocks and caves. On average they can be found between 500 till 1200M above sealevel depending on the species and region.

Captive requirements:  Bamboo ratsnakes are relatively easy to maintain. The main subject is temperature. These snakes do not tolerate long-term high temperatures well as they come from humid and cool mountainous environments. This does mean that many hobbyist especially those who have a separate room for all their reptiles do not need to use additional heat to keep these snakes. On average these snakes can be best kept at a temperature of 22 till 25 degrees Celsius. With O. p coxi being able to tolerate the ‘highest’ of temperatures. Occasional higher temperatures can be tolerated but will long-term cause these snakes to get stressed, stop feeding and die so mind this in the summer and prevent extreme heat. Night temperatures can drop till 15C or even lower without problems. As these snakes do not climb (a lot) and prefer a hidden secretive lifestyle they are a very good snake to be kept in the so called ‘snakerack’ systems. In a setup like this a substrate of cypress mulch a hide and box with humid moss can be sufficient to keep these snakes in good health. Make sure you replace the substrate every month and to do regular spot cleaning to deal with the faeces the animals produce as the snakes have a high metabolism. We advise to set the animals up like this when it is newly introduced to any collection to make it easy on feeding and noticing and issues. That being said, these snakes can be very active and keeping any snake in a setup like this can do great damage on the possibility to observe and enjoy these snakes.

Oreocryptophis species are great snakes to keep in a more natural decorated (potential bioactive) setup with (life) plants and lots of cork and logs to hide and crawl under and between. In this case a substrate mix of cocopeat, cypress, different mosses and leaves is a great substrate. Make sure to use a drainage layer when you are going for a complete bioactive setup and even in a well-managed bioactive terrarium spotcleaning would be adviced. Scindapsus, Epipremnum, Ficus and Asplenium are good options to plant the terrarium. They do well in the conditions your bamboo ratsnake prefers and help to keep up the humid conditions. With corkbark, branches, bamboo and logs the terrarium can be decorated. Although these snakes will make an intricate system of holes and tunnels they will be actively hunting for food on the ground level during the evening and night. During the day they will mostly hide. This is also under influence of the amount of light, as very bright light is avoided by these reclusive snakes. Mist every other day to raise the humidity which needs to be about 70/80& during the day and may reach 90& during the night. Always provide the snakes with a big waterbowl that the snake can fully emerge in. Replace the water daily. These snakes can be kept separate or as pair. For an individual a terrarium that measures 60x45x45 would be sufficient. For a pair 90x45x45 would be more appropriate.

Diet:  In the wild species are known to eat all kinds of small rodents and some amphibians and young Oreocryptophis will also feed on small lizards like ground dwelling skinks they find in their habitat. In captivity most species readily accept (frozen thawed) small mouse. Oreocryptophis have a relatively fast metabolism. Also it is best not to feed these snakes with a big preyitem but rather with (several) small till midsized prey not thicker than the thickest part of the body. Hatchlings and semi-adults can be fed ones every 4 till 6 days, adults several preys every 7 days. Many Oreocryptophis will not feed when opaque so use this period as a small pause.

Hibernation:  To simulate a natural course of seasons and to stimulate breeding a hibernation at temperatures of 10C (coxi / laticincta) till 6C (vaillanti, pulchra) during the winter is advisable. Although this does not seem to be needed in many cases and animals live and reproduce well without a hibernation. This period also gives the females rest from producing eggs as they can lay a lot of eggs during a season. Some hatchlings will not feed until after a hibernation. To hibernate these animals it is best to not feed them for 14 days under their normal conditions. After that they can be placed in a box or faunabox filled with a thick layer of moss and some cork to hide. Always make sure they have access to clean water. When this is done temperatures can be dropped during a period of 4 weeks from 22C till 15C and after that they can be placed in the hibernation chamber. Which can be a cool basement or adjusted refrigerator. They can be kept in these conditions for 12 till 16 weeks to be then taken out of the cooler and set a temperature of about 15C that can be raised during a four week period to their normal conditions.

Breeding and captive propagation:  When these snakes first arrived in the hobby prices were very high. They were new and came out of hard to reach places. But it turned out these snakes breed very well and this made they are much more affordable now. Oreocryptophis can be sexually mature after 24 months. males sometimes even at a younger age (18 months). Although it is always advisable to let the animals grow steadily and mature till about 30/36 months before trying to breed them. Breeding snakes to young can cause health problems, especially for the females. These issues can result in egg bounding or ovary problems causing the snake to potentially die from complications. To start breeding males can be introduced to the female after the hibernation and all have fed again. He will court the female by gliding and twitching along her body trying to lift her tail to insert his hemipenis into the cloaca. If the female is ready she will lift her tail, allowing the male to enter. Copulation can last between 30 minutes till several hours.

Females take about 50 till 60 days to develop the eggs but females can have several clutches during a season as result of a single pairing. Clutches consist normally of 2 till 8 eggs, sometimes more. The eggs can be incubated on vermiculite or in sphagnum moss at temperatures ranging from 25C till 29C. Incubation will take depending on the temperature 75 till 50 days.

Hatchlings can be setup in a small plastic container on a substrate of moss. Always add a small hide and a waterbowl with clean water. It can sometimes take a while for hatchlings to accept dead pinky mouse. It can help to first try with a small live pinky mouse.