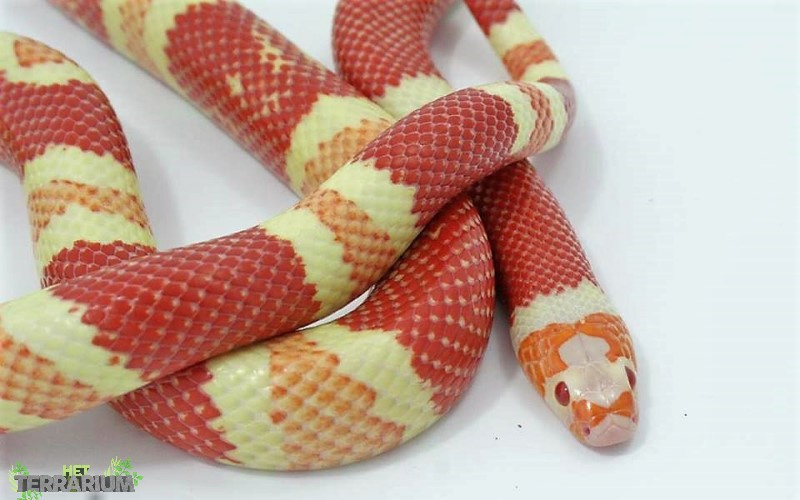 The Honduras milk snake is one of the longest species of Lampropeltis and is only surpassed by the big Lampropeltis triangulum gaigeae. They have a calm character and like most Lampropeltis species a strong feeding response. This combined with the many mutations that are available nowadays makes them a favourite among the milk snake enthusiasts.

General appearance:  On average captive Honduran milksnakes will reach a length of  130cm. However, there are many instances in captivity where the snakes reach a length of 150 to 160cm. Young animals are already 25 to 32cm when they hatch. The head is wide and slightly separated from the neck. There are two natural variations known, the well-known "tri-color" with the classic red-black-white-black band ring and the 'bicolor' also called 'tangerine' where the normally white band is orange to red in colour. At the end of each scale is a small black dot. The melanin level will get higher ones the snakes mature. Sometimes causing them to be almost black with a faint pattern. If you want an adult with the appearance of a newborn Lampropeltis t. hondurensis then it is an option to purchase one of the 'hypomelanistic' variants. These have a reduced content of melanin and thus preserve their more youthful appearance.

Origin and habitat:  Naturally this species occurs in the tropical rainforests of north-eastern Costa Rica, almost the whole of Honduras - the area where this snake gets its common name from and Nicaragua.

Behaviour:  They like to hide themselves between the ground cover of the forest between fallen branches, leaves and stems. In the past wild caught Hondurans can be very shy and hide away when disturbed. They would mostly try to get away but may bite when fixated or handles incorrectly. Today, virtually all Honduras milk snakes that are kept come from many generation offspring of animals held in captivity and this has resulted active, curious and calm snakes. This species is most active during dusk and evening.

Housing:  These are real bottom dwellers and live naturally among fallen leaves and branches in the soil of the rainforest. Temperatures here are moderately and there is little difference between day and night temperatures, the humidity is relatively high. Keep this in mind when you are setting up an enclosure for these snakes. Offer a substrate in which they can dig such as aspenbedding or coconut based soil such as coco peat or Exo-Terra plantion soil. The average humidity will have to be around 60 to 70%. High humidity does not mean a wet substrate. Where the cocopeat will retain moisture  better and will aid in keeping a higher humidity level the Aspen will have less effect on this. However, it is easier to see dirt on the Aspen Bedding and remove when spotted. You can also choose to keep the ground cover slightly drier and offer a hiding box filled with damp moss. This humid shelter will especially be used when in shed or to lay eggs.

Heating can be done with a heating cable or heating strip. As these snakes do not bask a basking spot is not needed. This heat source may not exceed one-third of the ground floor so that your snake always has space to move away from the heatsource and to thermo-regulate between the warmer and cooler zone. The average temperature should be 24-25C on the cool side and 28C on the warmer side with a hot spot of 30C. At night the temperature may drop slightly but preferably not below 20C. Always keep a good observation on your snakes and monitor their behaviour. Is your Honduran continuously on the cool side or laying in the water bowl then this may be an indication that it is too hot in the warm zone. Provide plenty of hides various temperature zones in the terrarium. As these snakes are primarily terrestrial animals the height of the vessel plays a small role. That makes this species very suitable to house in a so called "rack system. Of course it is always better to observe the natural behaviour of your snake in a nicely decorated terrarium and with a snake rack you lose a big part of the fun in keeping these animals.

Like many Lampropeltis species the Honduran milk snake can be cannibalistic so it is advisable to always house them separate outside the breeding season. Young animals can be raised in a small tub or faunabox such as the Exo-Terra Faunarium PT2310. For adult animals a minimum surface area of ​​100x50cm is required. Big individuals deserve a terrarium with a bottom surface of 120x50cm or larger.

Hibernation:  The Lampropeltis triangulum hondurensis naturally endures a period of lower temperatures. This cooler season starts in October in which you stop feeding three weeks at normal conditions. Temperatures are lowered during the following month to about 10 to 15C and lighting hours are during this month reduced from 12 hours till 8 hours. This rest takes an average of 8 to 12 weeks. After this period you can again raise the temperature to its previous level. Breeding season starts after this period so make sure the Lampropeltis are well fed before you place animals together for breeding.

Diet:  By nature these snakes have a very varied diet that consists of small mammals but also of a variety of lizards and snakes. Young animals also sometimes feed on small amphibians. In captivity this species does extremely well on small mammals like mice and young rats or multimammate mouse. Do not feed these snakes with one large prey but rather with several small to medium sized prey per feeding that are not wider than 110% of the thickest part of the snake. Young animals can be fed once every 4 to 5 days during the first year of their life. Do not offer any food during the shedding period. Sub-adult and adult Lampropeltis can be fed once every 7 to 10 days. Because of the big size of the hatchlings when they come out of the egg this species is by far one of the easiest to start with mice of all Lampropeltis. Sometimes one start feeding right away with little fuzzies instead of small pinkies mouse.