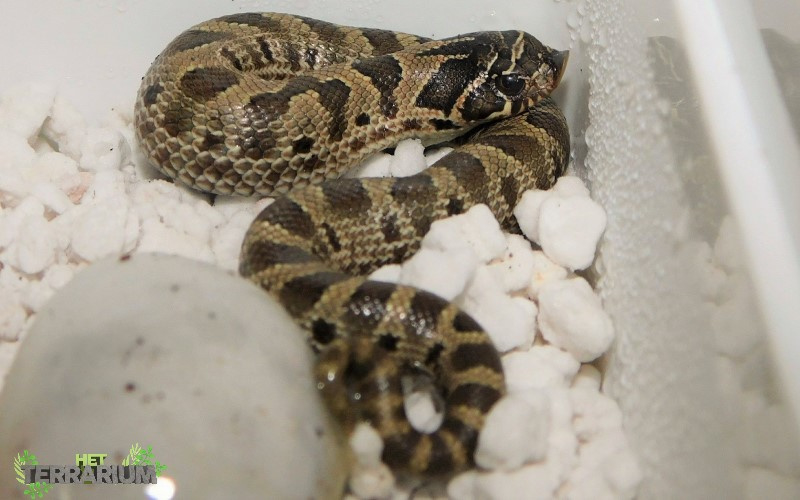 The western hognose snake has long been very popular in the hobby and since the availability of various mutations this popularity appears to have exploded. Because of their easy maintenance and small size they are very suitable for the enthusiast who does not have the space for larger species of snakes. They are active animals and in captivity generally have a calm disposition.

Physical Characteristics:  Males differ greatly in size compared to the females. Where males are on average 40-50cm and remain pretty slim the females are very robust and big and get about 60-80cm long. There are large specimens known that measure 90-100cm but most females never reach this length. Please see the attached pictures for more information about their appearance.

Behaviour:  These snakes are active during the day and twilight. They are always actively searching for food. When they feel threatened they can give of  quite a show. Initially they will try to out bluff their attacker. They do this by blowing themselves greatly to increase their size, they keep their mouths open and hiss hard. Their necks become flattened and they do several mock attacks with closed mouth. If this does not work they will play dead. They then turn on their backs, salivate and protrude their tongue from the mouth and open their musk glands. Many predators will not eat dead prey. They will stay like this until their attracter has left and then quickly crawl away. Only in extreme distress the animals will bite.

Teeth and venom:  Heterodon nasicus has a opistoflyphe dental structure. The animals possess a fully developed venom glands, also called the Duvernoy's gland which are in contact with the teeth true a duct. Unlike for example Naja (cobras) or Crotalus (rattlesnakes) species the teeth are not mounted in the front of the mouth on the maxilia but more in the middle of the upper jaw under the eye. These teeth are enlarged compared with the rest of the teeth but not as well developed as in other venomous snake species. The teeth are not like a hypodermic needle but grooved and are designed to create a wound while holding of the prey so the venom can leak into the wound. The potency of their venom is low and primarily affects amphibians which are their natural prey. This venom is probably more a part of the digestion than the eventual killing of prey as the frogs or toads often get eaten alive. Although it seems to slow the heartrate of the prey.

Another theory for these enlarged teeth has to do with the natural prey of the Heterodon nasicus which consists of toads. Toads make themselves bigger when threatened by retaining air and blowing themselves up. This makes it difficult for a predator like the hognose snake to eat them. The theory is that these grooved teeth are used to prick the toad puncturing him to let the air leaf. However, amphibians have air pockets in their lungs which are filled with air. The probability that a snake punctures this is small. And thus the question remains whether this theory is correct.

In a short bite these animals will not inject venom. To do this they need to hold on and chew on the prey. Should this happen, the effects are often mild with only local effects like irritation and swelling that disappear after a day. Only if you are allergic the response may be considerably stronger.

Housing:  The Heterodon nasicus is easy to care for in the terrarium. This is a species that is held with great success in the well-known snakes racks. However the possibility to observe a great part of their interesting natural behaviour is lost in a setup like this and eventually this is a big part of the joy to keep these snakes. Although these snakes are sometimes successfully kept in groups we always advised to house Heterodon nasicus separately. This facilitates not only the monitoring of health and feeding but also prevents cannibalism which is not a unknown possibility with this species.

As substrate you can choose Zoomed Aspen bedding or beech chips. This substrate is dry, has a low amount of dust and the animals can easily dig in. Because of the light colour of this substrate waste is easy to find and remove. Offer several shelters in both the hot and cool zone. Further decoration can be done with stone plates and trunks or reptile caves. U can add some low climbing branches but these snakes are mainly terrestrial. Always offer fresh water. Misting is often not necessary in view of the dry area in which they occur naturally. You can spray a corner of the terrarium slightly moist in the moulting period and / or provide a shelter with damp moss.

Would you like to go for a more natural arrangement? then a so-called 'bio-active' setup is a good option. In this case, you can replace the substrate with a mixture of sand, earth and tree bark. Which on the cool side is easier to keep moist. The hognose likes to dig in this substrate. Add small isopods to the earth which will process some of the waste your snake produces. As live plants Aloe Vera is a good option.

Heating can be done with basking spots as with heat mats. Given these snakes are diurnal it is certainly a good idea to lighten on average 12 hours per day. The hotspot can measure 35C. The average temperature is 28C to 26C. At night the temperature may drop.

This species naturally hibernates for 3 to 5 months in the cold season.

Diet:  Feed hognose snakes with relatively small to medium-sized prey. Adults often do well on semi adult mouse. The metabolism of these snakes is relatively fast therefore young animals are fed every 4 days. Animals of one year old every five days and sub-adult and adult animals once a week. It is not uncommon that certain males regularly skip prey. In the shedding period this species also often refuses to feed.

In spite of their natural diet that consists mainly of toads these snakes fare well on a diet of small rodents. However, newly hatched hognose snakes can sometimes be difficult starting up on pinky mouse right away. It sometimes helps to thaw the mice in tuna water or water where frogs swam. Other possibilities is heating of the mouse so that the smell is more apparent or cutting the skull of the mouse. You can also try smelt when this does not work. When the animals are feeding on these prey transferring to scented pinky mice is very easy. Smear the pinky mouse along the smelt so it gets the same smell. Ones the babies feed on this they are quickly set on non-scented prey. Ones they feed constantly  their feeding response can be very big..