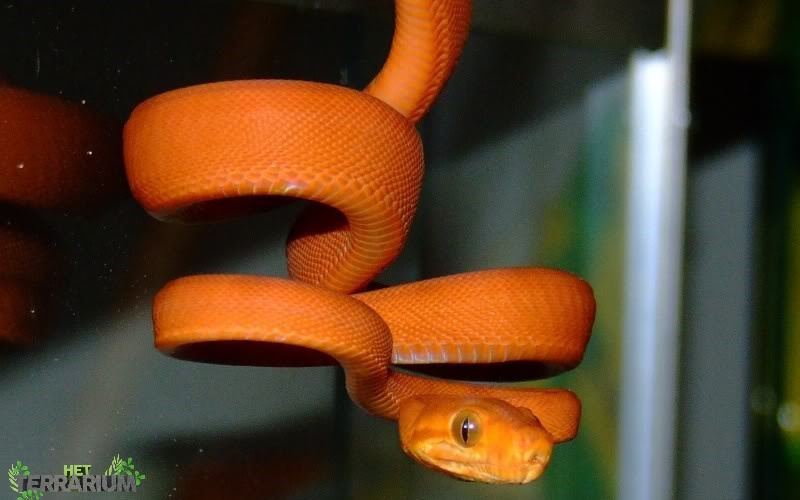 This tree dweller is often very defensive so is not suitable for someone who like to handle his snakes. But their bold behaviour, many different colours and relatively easy care have made these snakes very popular. If you like to keep Corallus caninus or Corallus batesii but lack the experience for these more sensitive species than the Corallus hortulanus is very suitable to get more experience these arboreal boids. Due to their large range and adaptability to different habitats they adapt a lot easier to different setups.

General appearance:  They have a slim body with a clearly separated and relatively large head. On average get this species will measure 150 to 160cm as an adult, large specimens may well be 220cm long. Corallus hortulanus is extremely polymorph and they come with a strong pattern to completely patternless, brown, grey, yellow, orange, red and everything in between. It is not uncommon that come brown animals are born from yellow parents and vice versa. There are certain lines where one can select on colour and pattern but you will never be certain about the outcome. This makes breeding this species a lot of fun and is full of surprises.

Behaviour:  The Amazon tree boa is mainly known for two things. The fact that they are very polymorphic and their behaviour which, to say the least, is defensive. In general they do not like to be handled or disturbed and though they will if possible try to crawl away their first reaction is often to bite when disturbed. This behaviour could be explained by the fact that they often put themselves freely in the sight in their wild hunting range. It is not uncommon to find them on an overhanging branch in an open part of the forest. This is because this route is one of their favourite prey, birds. They are therefore quite fragile and if they get the idea that they are seen, they will therefore do everything to deter a potential attacker. This behaviour seems to be on its highest during the night and evening. They are true nocturnal hunters. especially if the humidity is high, they will often move about looking for a good ambush position.

Origin and habitat:  Corallus hortulanus occurs naturally in and along the edges of tropical forests, in gardens and plantations in almost whole central eastern to southern South-America. Including Guyana, Suriname, Brazil, Ecuador, Bolivia, Venezuela and Peru. From sea level to 1500m above sea level. There are reports the presence of these species to 3000m above level. They are located in general, half a meter up to 20 to 25 m above the ground in branches, hedges and trees. They are very well camouflaged and they spend the day hiding between vegetation.

Housing:  In general these snakes do well in captivity and are easy to take care of in a terrarium. Adult animals require a terrarium of at least 60x45x60 per animal. Large specimens should be housed in a more spacious enclosure. Provide adequate shelters especially in the upper part of the terrarium. Use many horizontal branches and hang plants between them in which the animals can hide. U can also use hollow cork logs for additional climbing options and hides. The animals will almost never spend any time on the ground but a good soil captures waste and makes maintaining a higher humidity easier. Think for instance of coco peat soil mixed with bark and leaves and/or moss.

Young animals require year-round high humidity where adults naturally have a drier period from August until October. The high humidity is needed especially for younger animals to make sure they shed properly. If this species is kept to dry they often shed their skin in parts and it is not unusual that old shedding remains stuck on the tail. If these remains go unnoticed the circulation in the tip of the tail can be cut and could die and fall of. The average temperature should be 25C on the cool side and 27C / 29C on the warmer side. These are naturally not sunbathing animals and to thermoregulate they move between hot and cooler sections in the forest or garden. In the terrarium, this usually means that temperatures in the higher section of the terrarium are higher then the ones in the lower parts. So make sure there are plenty of climbing and hiding places in all zones and sections of the terrarium. Heating can be done with a (ceramic) basking spot or heatpanel against the ceiling of the terrarium. Make sure that your Corallus can not come into contact with the lamp or can curl itself and around it as this can lead to burning. Is your Corallus hortulanus much on the ground than this can be caused by health problems, excessive temperatures at the top or lack of hiding places in the upper layers of the terrarium. Note, also pregnant females often lay on the ground before giving birth.

Amazon tree boas lend themselves well for a bio-active setup. In this case it is best to use a LED or fluorescent tube to light the enclosure. Light 11 till 13 hours a day.

Diet:  Amazon tree boas are very easy to get feeding, if it moves and is warm they'll bite it. Young animals can be fed with pinkies which are replaced with fuzzys when they grow. Ones they reach 12 months of age they usually feed on prey like hopper mouse. Adult animals do just fine on a diet of adult mice and chicks. Make sure the prey is not to large as these are very slender snakes. Young and juveniles can be fed ones a week, where (sub)adults can be fed on a schedule of a prey per 14 days.