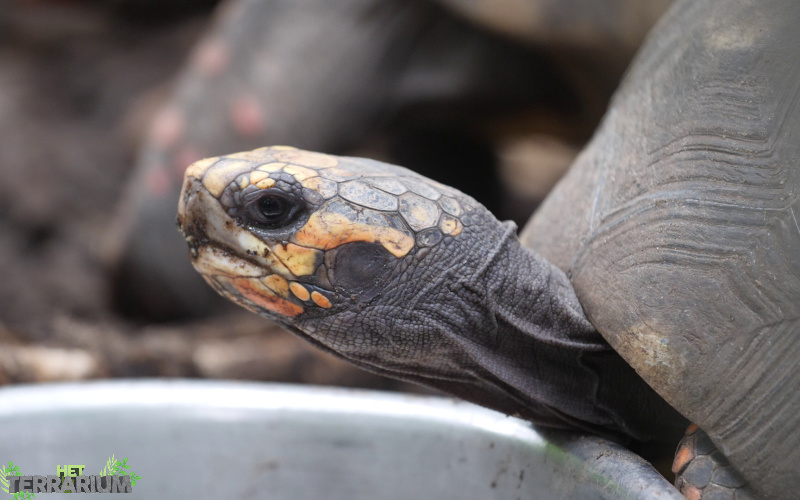 This tortoise is one of the larger species of terrestrial chelonians in South America. They are very popular in captivity because of their stricking colour and character. This species is bred readily within the hobby which makes the import and purchase of farmbred or wild-caught really unnecessary. Unfortunately, this still happens regularly. This species is closely related to the yellow-legged forest tortoise Chelonoidis denticulata found in the Amazon Basin.

Status:  The Chelonoidis carbonarius is classified by the IUCN as Vulnerable despite their large range. Habitat loss is probably the biggest threat, populations are increasingly fragmented by deforestation and roads build by men. This inhibits migration between populations and mixing genes for a healthy genepool. These tortoises also often get caught to serve as food for humans (bushmeat)

General appearance:  Because of the wide range of this species. Differences in general appearance can differ. Both in colour and size. The red-footed tortoise gets its name from the dark to black body colour with clear red colouring on the legs like burning coals. It's a heavy and strong built tortoise that can reach a carapace length of 30-35cm on average. There are large specimens known of up to 50cm. Their carapace is dark in colour with in the centres of each shield a light blotch which is most clearly visible in young animal. When they get older they often get a lot more black and the degree in light colouration on the shields decreases. Their plastron is generally cream in colour with dark spots and markings. The body has a dark grey to black coloration. On both the front legs and rear legs the ends of the scales have a red colouring, the degree can vary. The scales on the legs are very strong and solid to protect against sharp objects such as thorns in the bushes.

As mentioned, there is a lot of differences between the various locations. The two most common variants within our hobby are the 'Yellowhead' / 'Orange Head' from Suriname, and the 'Cherry Head' from Guyana. The Surinam animals can be recognized by the often yellow or orange scales on the head. However, this location can also have some red scales on the head. The difference with the Cherry Head is that the Guyanese form has intense red, and the colours markings consists a large contiguous staining. Where the Surinam form has less intense and more separated markings on the face. In addition, the southern form distinguishes itself from the northern by possessing an enlarged, top scale on the inside of the front legs. The Cherry Head often remain smaller than the northern variants. Another indicator is the almost completely dark to black plastron of the Guyanese form. Because of false information about the origin and ignorance there are several crosses between these and other variants. So unless you are certain of the line or origin you can’t always be sure on what variant you have.

Behaviour:  Red-footed tortoises are diurnal. They spend most of their day foraging for food of all kinds. They are calm walkers. In captivity the animals have a lot of interaction with their caregiver. They are not shy and will eagerly walk to the caretaker to see if there is any food. They can be kept in groups.

Origin and habitat:  This tortoise has a wide distribution in South America. The animals in the hobby originate mainly from Suriname and Guyana. However, this species also occurs throughout Venezuela, South Panama, South of the Andes in Colombia, Peru, Ecuador and Bolivia to the east of Brazil. Because of the large distribution the preferred habitat can vary. But they seem to prefer humid forests, forest edges and grasslands where the average temperature is high and does not fall below 20C.

Housing:  The red-footed tortoise is a strong and active tortoise. And therefor requires a lot of space. This species seems to be the best kept in a group. This means a lot of square meters.

Young animals can be raised in a terrarium that measures on average 100x50x50. Give the animals a thick layer of moist ground cover. Pyramiding of the shell if often the results of a dry environment and / or a poor diet so a high humidity is important. Place many hollow semi-circular cork stems or the Exo Terra Turtle cave as a hideout. Other furniture as logs, half buried in the ground break up the living area and offer some form of enrichment and training. Mist daily to keep the humidity high. Adult animals require a similar setup, just a lot bigger. For a pair a minimum surface area of ​​2.5 square meters is required. With an additional square 1.5M per additional animal. Use a lot of hides and furniture so animals can avoid each other when needed and to create visual barriers. Place these in various placed of the enclosure, each with its own temperature zone so that the animals can always choose an appropriate shelter. C. carbonarius is very active and not shy so if they feel safe they will be seen almost constantly. Before the lights go out they look for a hiding place where they stay during the night.

Provide an average air temperature of 28 degrees Celsius, with 25C in the cooler zone. The hotspot can measure 35C or higher. A small cooling in the evening is possible but ensure that the temperatures do not drop below 20C for an extended period of time. Give these animals a large hot surface to bask and thermoregulate. Ceramic heaters are probably the best choice. Obviously you need to prevent the tortoises to come in contact with these very hot emitters. Lay some flat stones under the hot spot it properly absorb heat. The advantage of the ceramic heaters is that they do not affect the day / night rhythm of the turtles. This allows you to provide an optimum temperature at all times. Tortoises including these forest dwelling species have an average UVB requirement. Thus a UVB emitting lamp in order to meet this requirement is needed. For example, you can replace one of the hot spot ceramic radiators for a HQL UVB light. Keep the average humidity at 70-80% which rises in the evening. Offer a deep substrate that absorbs waste and moisture well, like cocopeat earth. This can be mixed with bark and sand as well as leaves.

Diet:  Like many tortoises the Chelonoidis carbonarius requires a varied and high fibre diet. In the basis various vegetables such as carrot, chicory, endive, tomato, cauliflower leaves, peppers, pakchoy, Hibiscus, Grasses, romaine etc.  Also ad fruits like banana, apple, watermelon, strawberry’s, pear etc. As addition you can add various types of pellet foods specially for tortoises. Give fresh vegetables and try to find a place where a lot of herbs and greens grow to add to their diet.

This tortoise is known for their taste for animal matter. It is not uncommon that they feed on the carcasses of various mammals. Therefore, add in small dead mice and chicken pieces. These are rich in animal calcium which is very well absorbed by the tortoise. Young animals can also be fed with earthworms and pieces of mealworms.

Feed adult animals an average of 3 times per week, young animals 4 till 5 times a week. 70%/80% green, up to 30%% fruit and supplement ones a week with animal matter. Use high quality calcium supplements and add there regularly. Add a complete vitamin supplement ones a week to the greens. When you also provide the tortoises with a UVB HQL light no D3 should be added