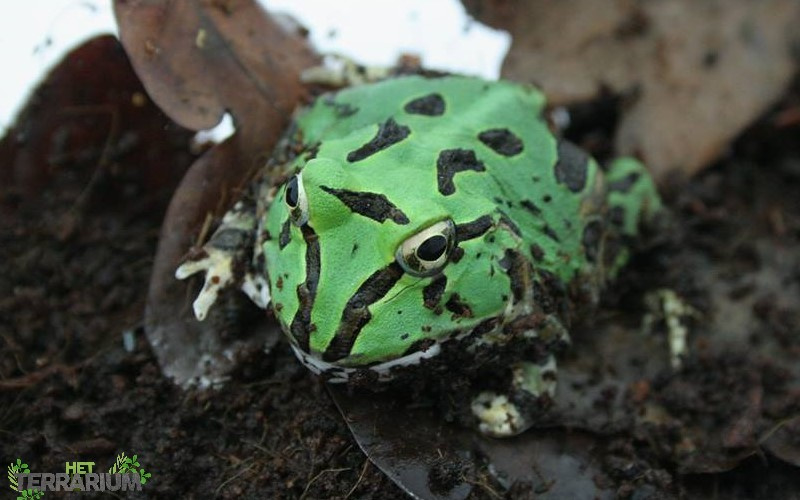 The Ceratophrys stolzmanni is one of the smaller species of the genus affectionately also known as the Pacman frogs. Males are approximately 5cm long where full grown females are about 8cm. One would think that therefor they will also require less space as the larger species Ceratophrys. However, this is also one of the most active species within the genus.

Status:  This species is on the IUCN list described as vulnerable because of their fragmented distribution, habitat loss and low numbers of animals found within the known distribution.

Origin and habitat:  This frog is found in north-western Peru, the Gulf of Guayaquil and Ecuador. Their natural habitat consists of sparsely wooded grassland at the edge of the rainforest and other populations are found in dry sandy plains with little vegetation like grasses and trees only near (temporary) streams caused by heavy rains in January to May.

Almost all Ceratophrys stolzmanni that are kept in captivity are from the breeding station 'Wikiri' in Ecuador. This population comes from a dry, mostly sandy region in Ecuador. In June to November temperatures are lower and there falls hardly any rain and the frogs dig deep into the soil. If the rainy season that starts in December / January begins and temperatures rise the frogs become very active and the mating season begins.

Husbandry:  In captivity it is best to keep these frogs individually in a well ventilated terrarium of at least 60x30x30cm or for instance the Exo-Terra Glass Terrarium PT2603, 45x45x30. Heating is best done by means of a heat mat that covers 1/3rd of the surface. Be sure to always leave space for an animal to get away from the heat source to thermoregulate and prevent overheating. This frog likes relatively warm temperatures, provide an average air temperature of 26/27C and a humidity of an average of 60 to 70%. In the breeding season you may increase the temperature several degrees and mist more heavily and often to raise the humidity  to 80-95%. Offer a thick layer of substrate, use a blend of coco peat and moss. For these species, it is also possible to add sand. Keep the soil moist but certainly not wet, to prevent any acces water to make the substrate to wet it is best to use a drainage layer. Always provide a shallow dish at their disposal with clean water to bathe. Mist once every 2 days. If the conditions get too dry they can go into a drought sleep. They dig themselves deeply and maybe be inactive for months. If you want to attempt breeding with these frogs this dry period is essential. One can illuminate the enclosure with a daylight bulb which also increased air temperature. This species has no relevant UVB requierements. Additional heating can be done by means of a heat mat under a portion of the bottom or along a side wall.

Cover the walls in order to create a more secure feeling. Dry leaves and pieces of bark and other tropical wood can serve as  shelter for the frogs to hide under. You can make use of live plants as for instance the Philodendron scandens for further decoration. If your Pacific big mouth frog is moving from their hiding after spending a long time in that one spot, chance has it the animal defecated in their old hide . Remove any faeces it immediately. Adding springtails and small tropical woodlice helps keep the soil cover cleaner.

Diet:  Ceratophrys species are known for their huge appetite and the ability to consume relatively large prey, including small rodents like mice. These mice are quite a rich source of calcium but not suitable as basic food given these are very fat. Feed the frog especially with various species of insects like crickets, small to medium size grasshoppers and mealworms. Earthworms are a big favourite. Dust once every other fooditem with a calcium or vitamin powder and feed the feeders well with various fruits, vegetables and green leaves. Isopods have a very good calcium-phosphorous ratio and are therefore a good alternative to mice as a calcium source.

Feed young animals daily, and adult animals once every 2 to 3 days several preys.