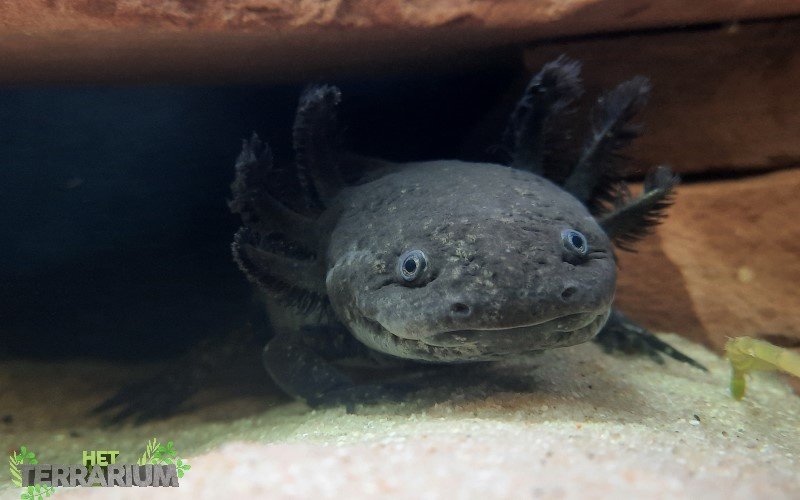 The Axolotl, often confused to be a fish with feet, able to grow back limbs that are  bitten off and the inspiration for the Pokemon Wooper. This makes the axolotl an animal that captures the imagination of many. They are nearly extinct in their natural range but are bred in great numbers in captivity. Because of their relatively easy care and odd appearance they are great salamanders for those enthusiast that are looking for an introduction species to aquatic salamanders.

General appearance:  The Ambystoma mexicanum belongs to the mollsalamanders. They are on average 25 to 30cm long. They have a fish-like body, long sideways flattened tail, and of course the external gills which are located in the neck. The natural form is dark brown in colour with a lighter colour abdomen. In captivity, there are many mutations. Most common are the albinos and Leucistics. However, there are melanistic animals that are very dark almost black in colour and 'Paradox' animals. These demonstrate both the appearance, for example, an albino as the wild type.

Natural origin and habitat: The axolotl is a salamander which is has it very difficult in their country of origin and is therefore strictly protected. Numbers have declined drastically by pollution, destruction of its most important habitat and introduction of Tilapia (perch-like fish) and other non-native fish population has been greatly reduced and is this species only lives in a few places South of and Mexico City (Mexico).

In captivity these salamanders are bred very successfully for both the hobby, conservation of the species and scientific research. So successful that there is significantly more Axolotl in captivity then there is in the wild. The hope is to reintroduce healthy populations. But as long as the current threats remain there is little chance it will be a success. Their natural habitat is deep lakes and connected canals located in volcanic mountains.

Neoteny: Many amphibians have a larval stage and the adult stage they reach after a metamorphosis. In Axolotl this metamorphosis to the land phase is absent. The Axolotl is one of the few salamanders that are not going through any metamorphosis and can reproduce in its aquatic stage. It was thought for a long time that the axolotl reproduce in the larval stage, but this is actually not correct. The animals have reproductive organs that are underdeveloped at birth and mature as they get older. They grow and mature, but the metamorphosis as is seen in many other salamanders will not happen and they retained their larval appearance. This phenomenon is called Neoteny, of the Greek neo: new, young + tenein: remain. Other known salamanders in which this phenomenon also occurs are for instance the Sirens. It is possible to let the axolotl metamorphosis thru the addition of iodine to the water. This in combination with the lowering of the water level puts the metamorphosis stage in operation. However, they often die shortly after metamorphosis.

What is also very special about these animals is that they have the possibility to regenerate entire limbs, gills, tail or toes, etc. after damage of loss. This means that if their legs get bitten off by a predator or other salamander in a feeding frenzy It can grow back! One of the reasons why there is done so much research on this particular salamander.

Husbandry: In captivity this salamander proves to be easily kept if setup correctly. The most important thing is to avoid too high temperatures. On average, one can keep the axolotl at a temperature of 12C to 17C with an average max of 22C. What for many means that is doesn’t need to be additionally heated. Long-term high temperatures of 25C or more cannot be tolerated and can lead to the death of your axolotl. Animals that are exposed too long to high temperatures lose their appetite and are less active.

By nature they are located on the bottom of deep lakes. This makes this species does not tolerate bright light. Would you still want to illuminate the aquarium slightly to observe your Ambystoma then make sure you offer adequate shelters and floating plants to create shade and dim light. Filter the water but prevent a constant strong current. Replace 20%/30% of the water every 7 till 14 days. As substrate keepers often choose a fine soft sand. Coarse gravel can accidentally be swallowed with their prey during their strong feeding response and this can lead to blockages. So we would advise not to use this. Many keepers also use no substrate at all for easy maintenance and to prevent any problems with indigestion. You can also uses slate stone to cover your bottom and give it a more natural looking appearance.

Per held Axolotl 60 litres of water is a minimum. A big ground surface is the most important given that these salamanders are most active on the ground. walking about and looking for food. If you would like to keep several axolotl together make sure they are equal in size otherwise there is risk of cannibalism. It is not uncommon that because of a feeding response a toe, foot or piece gill get bitten of by tankmates.

Amphibians are very sensitive to pollutants in the water. This can cause damage to their skin and will also be absorbed by the skin into their system. So the quality of the water has a great impact on the health of your salamander. In our tap water are several of these substances and metals that can affect your pet. Therefor we recommend to use every water change something as Easy Life "filter medium" or Tetra 'Aqua Safe'. These products bind to and neutralize these harmful substances in order to be subsequently filtered out of the water through the filter. There your filter and the bacteria growing in it can easily eliminate these otherwise harmful substances like chloride and metals.

Diet: Naturally these salamanders eat many small species of invertebrates like worms, shrimps etc. and also fish. In captivity young animals can be fed daily (pieces) earthworm, blood worms, brine shrimp, etc. Adult animals can be fed less frequent with for example earthworms, pieces of fish, large bloodworms and small shrimps for example. Some keepers also feed with beefheart. We would not advise this as a staple diet but it can be a nice way to offer some variation.